THINK OF THE CHILDREN !

Cliff May at The Corner muses about the fate of Scooter Libby:

Bill Clinton lied to a grand jury. As a result, he did not lose his job, did not go to jail and soon thereafter became a multi-millionaire, lionized and celebrated in his party and around the world.

If that’s the fate in store for Libby, by all means, bring it on.

One more point: Valerie Plame is getting $2.5 million for “her story.” How much did New York publishers and Hollywood producers pay for the stories of Paula Jones and Juanita Broaddrick?

May doesn't get into the hypocrisy of many of the Clinton pardons. Many of which were incredibly controversial; with Clinton even pardoning his half-brother Roger for his drug charges.

Tell me how appropriate that is for a President.

The self-righteousness of the left makes any normal person want to puke.

So, I'm begging them (and Nancy Pelosi): Think of the message you are sending to the children! 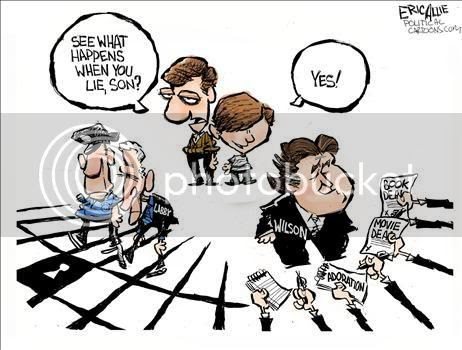 (Eric Allie's cartoons can be found here)
Posted by Dr. Sanity at 8:03 AM