"They always blame America first." That was Jeane Kirkpatrick, describing the "San Francisco Democrats" in 1984. But it could be said about a lot of Americans, especially highly educated Americans, today.

In their assessment of what is going on in the world, they seem to start off with a default assumption that we are in the wrong. The "we" can take different forms: the United States government, the vast mass of middle-class Americans, white people, affluent people, churchgoing people or the advanced English-speaking countries. Such people are seen as privileged and selfish, greedy and bigoted, rash and violent. If something bad happens, the default assumption is that it's their fault. They always blame America -- or the parts of America they don't like -- first.

This conditioned response on the part of the academics, the intellectual and Hollywood elites is a result of many years of devouring a toxic diet made up of postmodern drivel, political correctness, and multicultural relativism--all of which feeds their already over-inflated egos, while starving their brains. Like Skinner's rats, they have been conditioned to respond automatically to certain cues; and Barone is perfectly correct when he concludes his piece, by quoting one of the few people in the Democratic party who have broken out of the leftist Skinner box and "gets it":

"There is something profoundly wrong when opposition to the war in Iraq seems to inspire greater passion than opposition to Islamist extremism," Sen. Joseph Lieberman said in a speech last week. What is profoundly wrong is that too many of us are operating off the default assumption and have lost sight of who our real enemies are. 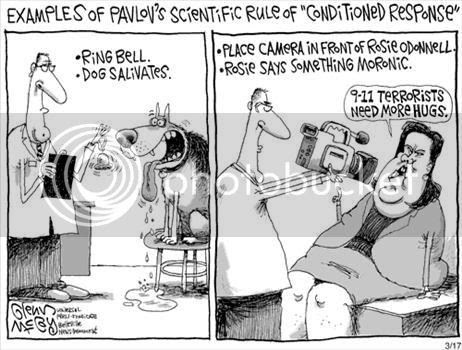