REDEPLOYMENT'S JUST ANOTHER WORD FOR 'CUT AND RUN'

But, you knew that.... From Wretchard, who first quotes our new intrepid botoxed Speaker:

Nancy Pelosi spoke on PBS today on the subject of Iraq. Here's a quote that may provide a window into her thinking.

"I mean, the point is, is that our presence in Iraq, as viewed by the Iraqis and by others in the region, as an occupation is not making America safer. ... So what is being accomplished by our being there? A responsible redeployment outside of Iraq ... The president -- victory is elusive. Victory is subjective. What does he mean by 'victory'?"

What does he mean by 'victory'? A somewhat damning question by a person who will be the "leader" of the US Congress.

"I don't think this sort of Democratic obfuscation will wash. War is like sex. You're either in or you're out. Anything in between doesn't count for much. ... What's missing now is the political courage to state a simple truth which, I believe, a vast majority of Americans would understand and agree with: George W. Bush got us into a war we shouldn't have fought and which we cannot conclude. It's time to admit our mistake, give Iraqis notice, provide some funding and security support for the Iraqi government, and commence to orderly withdraw. Not redeploy."

Which just goes to show that the most accurate pre-election predictions have come from Bin Laden and friends. Sad to think that they know Americans--especially those of the Democratic persuasion very well, don't they? 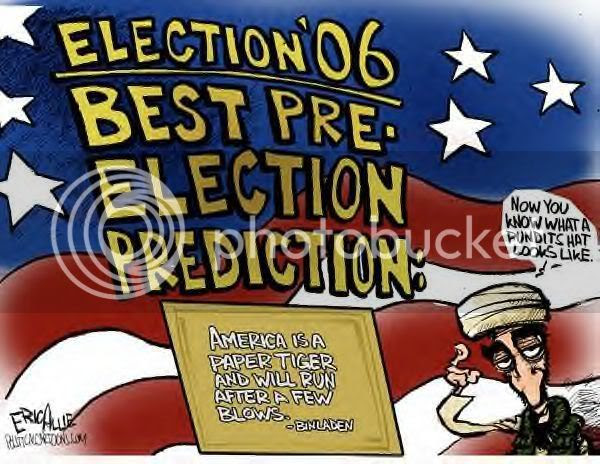