DO YOU SEE A PERSONALITY PATTERN HERE ? 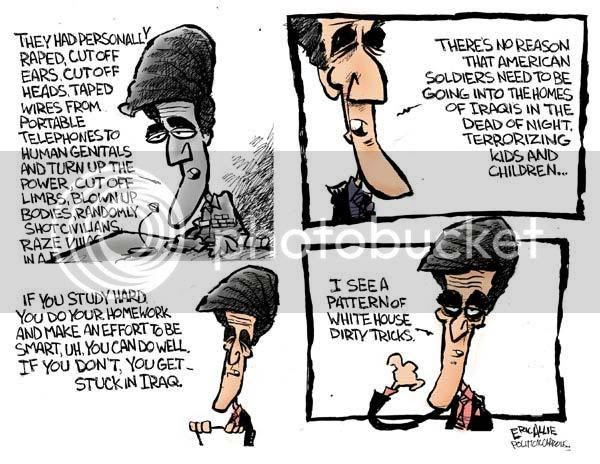 Even now, Kerry can't quite bring himself to make a heartfelt apology in front of the cameras. Note that he made his offensive remarks and his tough, "I won't apologize" speech in front of the media.

For an explanation of the characterological pathology at play, see A Lesson in Narcissistic Rage.

As The Anchoress notes, quoting G.K.Chesterton, a stiff apology is a second insult. But no apology is second nature to the narcissist, who will always refuse to take responsibility for his own behavior.

UPDATE: ShrinkWrapped notices that Kerry's campaign is actually a folie a deux:

As if to provide evidence that there is an orchestrated campaign underway to destroy our efforts in Iraq, there is this report in the McGill Daily, of a speech that Seymour Hersh gave in Montreal last Wednesday in which he stated:

If Americans knew the full extent of U.S. criminal conduct, they would receive returning Iraqi veterans as they did Vietnam veterans, Hersh said.

“In Vietnam, our soldiers came back and they were reviled as baby killers, in shame and humiliation,” he said. “It isn’t happening now, but I will tell you – there has never been an [American] army as violent and murderous as our army has been in Iraq.”

For those of us who lived through the Vietnam era in politics, this is all too familiar. In order to undermine support for the war, the Left, which included overt Communist front organizations and other overtly anti-American organizations, skillfully co-opted the natural disinclination of young cosseted Americans to join the military along with the growing disenchantment of a large swath of American opinion, to delegitimize the War in Vietnam. Among other techniques, the most crucial ultimately was the Seymour Hersh/John Kerry duet.

In fact, if Americans knew the full extent of the frankly narcissistic motivations underneath the repeatedly treasonous and libelous behavior of both Kerry and Hersh -they might actually be tarred and feathered. Leave it to the radical left and the MSM to laud these long-term losers, neither of whom are fit to lick the boots of even the lowest ranking enlisted man or woman in the US military.

NOTE: Eric Allie's political cartoons can be found here.
Posted by Dr. Sanity at 6:37 AM