Isn't it interesting that Hezbollah is suddenly willing to talk? After all their huffing and puffing of the last week?

Isn't it interesting that Hamas is ready to talk, after all their posturing and certainty of victory?

What's happening? I suspect that the leadership of both terrorist organization are really confused right now.

Every time they behaved this way before, it led to simultaneously enhancing their eternal victimhood, and that, in turn inevitably led --not to a victory; but it certainly never led to defeat, and it always improved both their status in the world as well as their fortunes.

Doesn't look like that's gonna happen this time. Enough momentum has been generated by the Bush policies in the Middle East to preclude yet another award for victimhood (although, Allah knows that they are sure trying to play that card out on the table, and, of course, they have help from all the usual suspects- and here, here too).

I think they must be in shock. Like the child whose parents finally and firmly said, "No. Not this time. You can't have it." And meant it. Initially, the child cannot believe that they have changed, so he'll try again to get what he wants. It always worked before. Why isn't it working now???

But if the adults are firm and make sure he understands that THEY MEAN WHAT THEY SAY, he will reluctantly-- and usually very sullenly-- cease his bad behavior. 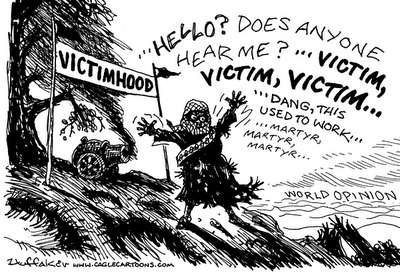 Children will learn from this sort of experience and will mature. They will learn to trust what people say; they will learn that their omnipotent fantasies must be reined in by reality; and they (and society) will be the better for it.


The omnipotent fantasies of the Islamic fascists must be reined in by the adults of the world. But these particular children, whose growth stopped back in the 8th century, are capable of wreaking quite a bit of damage. They tend to become suicidal and homicidal when they run into a reality they don't care for, or which thwarts their activities.

They have figured out a fundamental flaw in the supposedly adult west's thinking process. And it is this: The political correctness of western society has deified the state of victimhood to such an extent, that, if the Islamists can discover a way to make the foolish among us believe that they are the poor, helpless victims and not the aggressive, murdering thugs they are; then they will achieve true omnipotence. All will be forgiven, and any atrocity they commit will be acceptable and thus excused. The extremely and suicidally foolish will themselves accept responsibility for the Islamists' atrocities (root causes and all, you know)and their "mea culpas" will echo like the wails of the muezzin call to prayer.

Wait for it. Hezbollah and Hamas will make a last ditch effort to snatch victory from military defeat by exploiting the victimhood scenario. If the forces of civilization do not stand firm; if the west refuses to take off those PC sunglasses so the light can illuminate these type of shenanigans--then the victim scam can still work for Hezbollah and Hamas and their handlers.
Posted by Dr. Sanity at 8:05 AM