THEY HAVE THE RIGHT TO REMAIN SILENT AS THEY KILL US

I've received a few emails asking me my opinion on the recent Supreme Court decision. Mark Steyn says it best this morning: 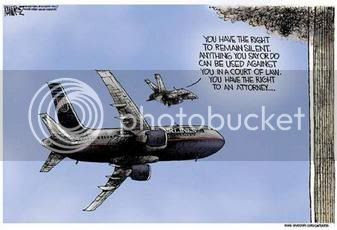 "The U.S. Supreme Court has now blown a hole in the animating principle behind the Geneva Conventions by choosing to elevate an enemy that disdains the laws of war in order to facilitate the bombing of civilian targets and the beheading of individuals. The argument made by Justice John Paul Stevens is an Alice-In-Jihadland ruling that stands the Conventions on their head in order to give words the precise opposite of their plain meaning and intent. The same kind of inspired jurisprudence conjuring trick that detected in the emanations of the penumbra how the Framers of the U..S Constitution cannily anticipated a need for partial-birth abortion and gay marriage has now effectively found a right to jihad -- or, if you're a female suicide bomber about to board an Israeli bus, a woman's right to Jews.
[...]
And, of course, al-Qaida never need to sign the Conventions now, do they? As the ultimate beneficiaries of the progressive mindset, they get all the benefits with none of the obligations. We're bound, they're not. If you're captured with the severed head of a U.S. soldier in your knapsack, you're covered by Geneva -- and, as your victim learned a mile back up the road, it's too late for him to call his lawyer.

In the broader scheme, Justice Stevens and co, in torturing the language to explain why the international jihad is not "international," have paradoxically conferred quasi-sovereignty on al-Qaida and its affiliates. The obvious question then is: doesn't that also apply to every other "non-state actor" out there?"

The left is downright giddy about the decision. But I don't think it is going to have the effect they are hoping for. In fact, it may have all sorts of unintended consequences and may be more of a rhetorical victory for the left than anything substantive in the long run.

UPDATE: And, speaking of the "ultimate benefits of a progressive mindset", PowerLine has this to say to the Times Two: Who died and left you President?
Posted by Dr. Sanity at 12:27 PM