I happened to notice this photo at Michelle Malkin whose troubling post about Hezbollah already present in the U.S. everyone should read: 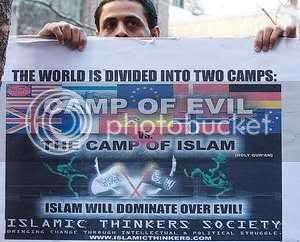 First, I had a good laugh. Then I thought, to be fair, I would go check out their site.

Feel free to go yourself if you want to. I won't link to it simply because I won't take the responsibility of referring anyone to a site whose over-riding and obvious goal is to convert you to the religion of peace--by actually trying to convince you that it is a "religion of peace".

What I found most interesting on the site is the list of "Scholars to Avoid" in one of the sidebars. Wanting to see what kinds of thought they encouraged you to avoid considering, I was somehow not surprised to discover that the scholars they didn't care for (at least the ones I checked out)actually express intellectual ideas that conflict with some aspect of Islam and (gasp!) question some of its precepts!

What an intriguing concept! THINKING ABOUT ISLAM!

Their name (Islamic "THINKERS" Societ) suggests that "thinking" is what they do in their society. But, if that is what you concluded from the name, you would be wrong.

There is not an original idea on the site, whose authors are content to merely quote the Qu'ran to prove how loving and peaceful they are. In fact, they merely repeat the verses of the Qu'ran and other doctrinal sources in Islam--with nary a synapse bothering to fire at all!

Islam does not look very favorably upon anyone who takes it upon themselves to take up thinking on their on recognizance. The holy documents tell all you should know and all you need to know about everything. Pure bliss for some, apparently; but it has little to do with thinking.

The society advocates Shar'ia; and Jihad--and all the usual exciting and fun concepts that are the trademark of the modern day Islamist--whose over-arching goal is to implement a worldwide Islamic Caliphate--one way or another, blah blah blah. This is clearly the reason why Islam is considered such a progressive religion; anchored to 21st century via a time warp from the 8th.

Islamic Thinkers Society? My initial reaction to the name was right on target. Islamic Bullshit Society would be more apt.
Posted by Dr. Sanity at 7:47 PM