THE INSANITY OF THE CHICKEN DOVES 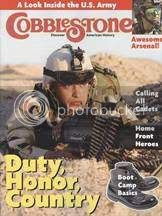 Tomorrow will be the 230th birthday of the United States of America. To a large extent, we owe our very lives and our liberty to a group of men and women over the last two centuries who have placed duty, honor, and love of country before other considerations; and who have been willing to fight the battles necessary to preserve the freedom of America.

In today's world--where many are in complete denial about the threat this country faces; and haven't a clue as to how freedom is preserved or defended to begin with-- we are frequently witness to a mindless anti-military insanity that characterizes one side of the political spectrum in this country. They protest violently about military recruitment on university campuses. They scream and chant about being for peace--these unwitting (and witting) agents of the enemy--and seem oblivious to the fact that their behavior only causes more death; and just happens to empower those who glory in mindless violence.

The enemy's agenda is also being waged at the K-12 level, as well as at the university level. Most recently by the indoctrinated parents and teachers, recruits in the army of the left--who have the honor and privilege of living in a free country, protected by courage of individuals who place personal honor and duty to their country before their very lives--yet, those wage this battle against the very idea of a military force, can't be bothered to understand the price of Freedom; nor are they capablie of appreciating the consequences of their knee-jerk pacifism.

Let us call them CHICKEN DOVES, because they prefer to die rather than fight for freedom; and they insist that we all should die along with them.

This philosophy illustrated in this article:

Parents and teachers are complaining that the latest issue of a popular magazine for preteens amounts to little more than an early recruitment pitch for the Army.

Cobblestone magazine, which is put out by Carus Publishing in Peterborough, is aimed at children ages 9-14 and is distributed nationwide to schools and libraries. Its latest issue features a cover photo of a soldier in Iraq clutching a machine gun and articles on what it's like to go through boot camp, a rundown of the Army's "awesome arsenal" and a detailed description of Army career opportunities.

Most controversial has been a set of classroom guides that accompany the magazine, which suggest teachers invite a soldier, Army recruiter or veteran to speak to their classes and ask students whether they might want to join the Army someday.

Oh, the HORROR! Children being exposed to an honorable profession that embraces duty, honor and country. Oh the SHAME! To ask men of valor and conscience to come and speak about their job defending the country.

In case you wonder what kind of a perverse fantasy world such people live in--it is one where they are so aghast at their own rageful and violent nature that they refuse to acknowledge they even possess such feelings. This enables them to wrap themselves in moral virtue and project those unacceptable impulses onto convenient targets so that they can remain morally pure and untainted. They see themselves as the anti-war movement, but they are truly the repositories of an unconscious cesspool of violence and hatred that breaks through quite regularly in their speech and behavior.

Who in their right mind doesn't prefer peace to war? How do these people imagine that peace is achieved, when there is one side in a conflict whose goal is to ultimately subdue the planet to their fanatical beliefs?

Our faithless chicken doves might easily demonstrate moral uprightness by bringing their insane talking points to the agents of the Taliban or to Al-Qaeda; both of whom regularly recruit children for their suicidal and homicidal ventures. The chicken doves of the left might actually show some real courage and real integrity (and I would honor them for that, even if I thought they were still stupid); because, if they truly believe what they claim they do, they would become "human shields" for the Iraqis and Israelis who are the object of the enemy's murderous hatred on a daily basis.

But you will notice that there is nary an anti-war "human shield" valiantly standing up to the enemy, is there? And do you know why?

Because these hypocritical chicken dove individuals know full well that they would be killed without hesitation or mercy; and their headless bodies thrown in the gutter by the barbarians they enably and support. It is sooooo psychologically convenient to pretend that the real evil is the US military; or Israel--anyone but those who must be stopped for all our sakes.

It is also so convenient to pretend that they protest the very idea of war "for the sake of the children." But Thomas Paine, in writing about the American Revolution captured the essence of the chicken dove philosophy:

I once felt all that kind of anger, which a man ought to feel, against the mean principles that are held by the Tories: a noted one, who kept a tavern at Amboy, was standing at his door, with as pretty a child in his hand, about eight or nine years old, as I ever saw, and after speaking his mind as freely as he thought was prudent, finished with this unfatherly expression, "Well! give me peace in my day." Not a man lives on the continent but fully believes that a separation must some time or other finally take place, and a generous parent should have said, "If there must be trouble, let it be in my day, that my child may have peace;" and this single reflection, well applied, is sufficient to awaken every man to duty.

But the basic chicken dove is psychologically naiive. He or she desires peace at any cost (except if they have to do anything) merely to cover up their own sense of moral inadequacy; to be able to remain blissfully in denial and delusion, so that they don't have to look in the mirror at their own souls, shrunken and dessicated by an ideology that was almost--but not quite--wiped out by the turn of the century.

They are infected with the moral delusions of grandeur of yet another outbreak of socialist/utopian ideals. It is an epidemic, and the left is the carrier. It turns the brains of true believers to useless mush, mindlessly repeating the same meaningless slogans that led to such widespread death, enslavement and misery in the 20th century.

But here is information about the magazine issue that is being protested from the Cobblestone website . See what you think:

When we think of the U.S. Army, we often associate it with the most recent war. However, the Army has a rich history that reaches far beyond current politics. As the Army has grown from being a part-time, loosely organized force in the Revolutionary Era to one of the best-trained militaries in the world, it has also contributed to peacetime culture and made possible huge advances in technology. In this issue we explore the work of the Army Corps of Engineers; the role of the Army National Guard in responding to domestic natural disasters, and Army training programs for doctors, teachers, and technicians. We'll also explore more traditional topics such as boot camp, the U.S. Military Academy at West Point, and what it means to be a career Army officer. A timeline of major wars in which the Army has played a role and a glossary of common military terms are also included.

I think it is a sad day for the United States and its brave military forces when a magazine for children is criticized because they dare to present those who choose to defend our liberty in a positive light; a light so shiningly bright that those who wander around with their eyes permanently shut are morally offended at what they are incapably of seeing.
Posted by Dr. Sanity at 5:10 PM