THIS TIME, I DON'T CARE ANYMORE...LET THE ZOMBIES TAKE OVER MEDICINE

A number of emailers have written wondering why I haven't commented on Obama's health care plans for America.

Doug Ross highlights an ad/op-ed piece by Nicolas Kristof, part of the massive PR campaign in the Age of Obama to make socialized medicine palatable to the American public. Kristof calls people like me "scaremongers;" and defiantly says, "This time we won't scare." But he doesn't have to worry.

My entire professional life as a physician and psychiatrist I have been exceptionally vocal about the prospect of government medicine here in the US. I have given impassioned speeches (when I was younger); written essays in medical journals and elsewhere; and talked until I am blue in the face to anyone and everyone about the horrors of socialized medicine and government interference in the health care system of this country. Once it would have seemed impossible that I would ever want to quit medicine; to stop practicing psychiatry.

I have watched with dismay as every year we have inched closer and closer to the Democrats and the left's goals; goals which I firmly believe will completely destroy American medicine. I have watched up close and personal the utter soul-destroying consequences to both patients and doctors alike, of the pervasive cultural collectivist and looter thinking in my specialty. Every time this madness is killed, it just doesn't stay dead. Like some kind of putrefying zombie, the left just keeps resurrecting it. Logic doesn't matter. Facts don't matter.

Let's face it. To the zombies of the left, reality doesn't matter. With President Postmodern in office, aided and abetted by zombie hordes in Congress; why should I pretend anymore that it does?

This time around, I JUST DON'T CARE ANYMORE. If that's what people want, so be it.

I will simply not practice medicine anymore. I will take my psychiatry books and my years of experience and do something else. I used to wait tables when I was in college. It's an honest living and Obama isn't interested for the time being in nationalizing restaurants--yet.

Having chosen to work primarily in the public sector most of my life, I have watched this entitlement and victimhood mentality grow to incredible proportions in parallel with number of laws, regulations, administrators, and oversight agencies. I have watched the decline of personal responsibility and the rise of endless demands and impossible clinical and psychosocial conundrums that I am expected to solve, even if my patient has no desire to change. I have been demoted to the near-mindless activity of pushing pills to the point that I understand why my collegues see every clinical situation as a biological malfunction--the old adage that says, to a hammer everything looks like a nail, comes to mind. Psychiatrists are the mental health profession's hammer; and drugs are the nail. And, the same powers that tell me to prescribe drugs, warn me against the evil of working too closely with any of the drug companies, for fear I might be corrupted, God forbid, by the dastardly profit motive.

I have watched as the quality of care has inevitably deteriorated even as spending went up. I have watched the system abuse patients and doctors alike--to the point that the frustration level just keeps going up and is simply not worth it anymore.

I quit my memberships in the AMA and APA some years back when I realized that they were not really in it to make things better for doctors or patients. Perhaps at one time they were real advocates for both, but now they are like most of those supposedly "capitalist" businesses--like AIG and all the others-- who willingly feed at the government trough and can't get enough of that yummy government pork. They sold themselves long ago--in both areas of clinical and research medicine-- in order to have a place at Big Government's table.

So, that is my answer to the emails; and why I don't intend to write anything further on the subject. We will all see what happens when and if the zombies take over health care in this country and make it all like Medicare and Medicaid....and GM and Fannie Mae and etc. etc.

I expect a Zombie Health Czar (Barney Frank would be perfect) will be appointed any day now. Someone who will have control over doctors' compensation and drug company profits. Someone who won't have to answer to the public who can control implementation of any aspect of the zombie plan that needs to bypass intelligent scrutiny. 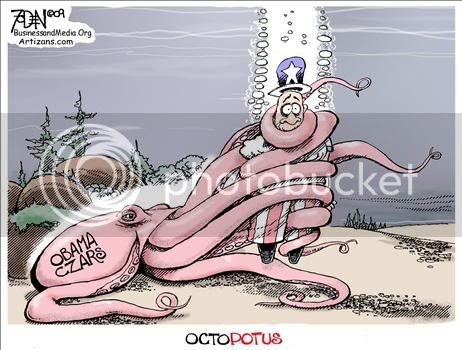 UPDATE: Can you imagine the over-the-top leftist hysteria and lunatic rantings about fascism if the Bush Administration had done something like this? Guess their biggest fear was that Bush would beat them to implementing a fascist state.

Can't wait to see what exciting plans they have for Republican or conservative physicians in the new Obamatopia.

UPDATE II: It just keeps getting worse and worse; more and more unbelievable. Now we know who the Obama Administration considers the real terrorists, don't we? How long before it's a criminal offense to oppose the One? As Andy McCarthy notes, "...pretty scary arrogance down there at the White House, no?"
Posted by Dr. Sanity at 7:07 AM