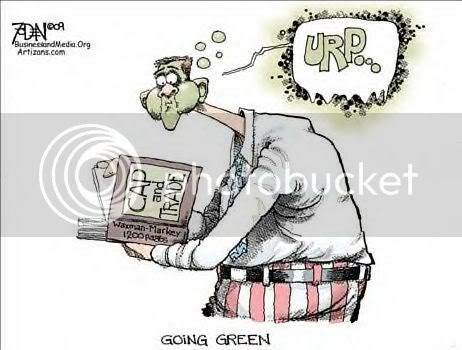 I think the person in the above cartoon just read this article:

The Spanish professor is puzzled. Why, Gabriel Calzada wonders, is the U.S. president recommending that America emulate the Spanish model for creating "green jobs" in "alternative energy" even though Spain's unemployment rate is 18.1 percent -- more than double the European Union average -- partly because of spending on such jobs?

Calzada, 36, an economics professor at Universidad Rey Juan Carlos, has produced a report which, if true, is inconvenient for the Obama administration's green agenda, and for some budget assumptions that are dependent upon it.

Calzada says Spain's torrential spending -- no other nation has so aggressively supported production of electricity from renewable sources -- on wind farms and other forms of alternative energy has indeed created jobs. But Calzada's report concludes that they often are temporary and have received $752,000 to $800,000 each in subsidies -- wind industry jobs cost even more, $1.4 million each. And each new job entails the loss of 2.2 other jobs that are either lost or not created in other industries because of the political allocation -- sub-optimum in terms of economic efficiency -- of capital. (European media regularly report "eco-corruption" leaving a "footprint of sleaze" -- gaming the subsidy systems, profiteering from land sales for wind farms, etc.) Calzada says the creation of jobs in alternative energy has subtracted about 110,000 jobs from elsewhere in Spain's economy.

Betsy Newmark wonders, "Why would American politicians want to ignore research that shows the deleterious effect of such policies on employment and follow Spain's path? Is the self-righteous effort more important than the actual results?"

Why? Because that's exactly how malignantly selfless narcissists operate.

And when the economic situation worsens, they will blame everyone else for their malignant incompetence, then shrug it off with a few, "But....we meant well! It's not our fault!"--and call for more regulation, more taxation, and more control.

UPDATE: Good Lord. Pelosi et al are a bunch of lunatics.
Posted by Dr. Sanity at 5:28 AM