In the last few days I have seen several editorial cartoons with the following theme: 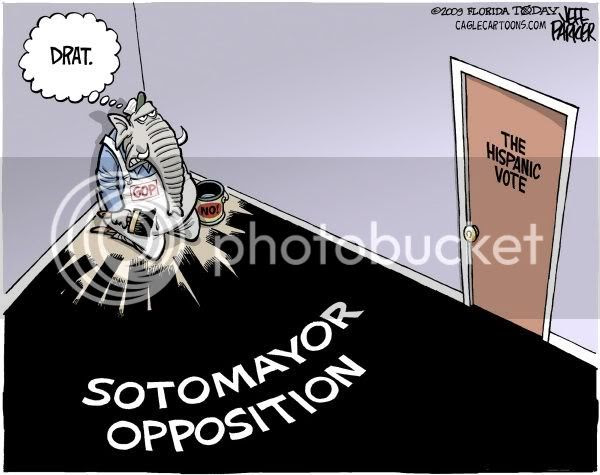 Let me spell the message out for Republicans: oppose Sotomayor and you will lose the "Hispanic" vote.

The sad thing is that Republican strategists are all aflutter at that terrible possibility. I submit that is the case only because Republicans have accepted the fundamental narrative of the left and have bought into the whole system of identity politics that dominate political behavior today.
But it doesn't have to be that way.

It's the same refrain you hear repeatedly these days in our multiculti, PC, and increasingly racist society. Yes, I said racist--and I'm talking about the definition of racism that Martin Luther King used; not the postmodern version. But the postmodern left has made this kind of racism cool and chic; and is preoccupied to the point of obsession with race and sex and gender and identity in our society.

It is sick. It is insane. And it is destroying what the idea of America has always represented.

In fact, just as America was on the verge of doing away with such discrimination; just as the content of one's character was beginning to take hold as an essential aspect of the American Dream, the political left and the Democrats decreed that one's skin color--and gender and sexual orientation and ethic origins and etc. etc.--were far more important considerations.

Just as Blacks were about to permanently throw off the chains that had bound them since the founding of the Republic, along came the do-gooders of the left who have now permanently chained them to the cult of victimhood--and they intend to do the same for women, gays, and all the other "poor and oppressed" groups they supposedly champion. Eventualy, the individual people who are lumped into these victimhood groups are going to wake up to the fact that they are being used to achieve power for these leftist elites; and that the left is completely and irrevocably invested in keeping them "poor and oppressed."

How can you fail to notice that all politics today is a matter of carefully pandering to one identity group after another? The way to power is to promise every group what they want. If you are really good at it--like the Democrats--then you can make as many contradictory promises as you want.

No one cares about you as an individual anymore (if anyone in Congress ever did); now, the only thing that is important is what identity group you belong to. You are appealed to as a woman; as an Hispanic; as a Black; as a Gay and every effort is taken by political parties to appeal to large identity groups--the "Hispanic Vote", the "Black Vote", the "Women's Vote", the "Gay and Lesbian Vote" and so on.

How much more racist or sexist or bigoted than this can we get?

If the Democratic Party and its lunatic leftist base has its way, America will continue its devolution into bickering and competing identity/victim groups. In fact, America is well on its way to becoming the most whiny, entitled, and bigoted nation on the face of the earth because of the new and socially acceptable hate politics of the left.

I am pleading with the Republican Party to resolutely reject the postmodern philosophical premises that are the foundation of such defective thinking.

Why can't the Republican Party once again be the party of the individual? Why should we pander to all these identity groups? WE ARE ALL AMERICANS and that is all that matters--or should matter.

And speak to people as individuals.

GO FOR THE INTELLIGENT VOTE. GO AFTER THE SANE VOTE. SPEAK TO THOSE OF US WHO DON'T GIVE A FLYING F*** WHAT COLOR OR CREED OR ETHIC ORIGIN A PERSON HAPPENS TO BE.

Appeal to the BEST within each person. Stand for their individual liberty and make their pusuit of freedom your goal.

If the Republican Party wants to to pick itself up and get back on its feet, it must reject this world view, and in particular, it must reject the left's rhetorical template. Appeal to people as individuals. Don't mimic those who are destroying this great country with their new racism. Don't pander to these victim groups whose outrage and entitlement has no end; and whose leaders are only intent on getting a share of some pie at the expense of other groups (there is a "food chain" of victimhood that the left cultivates). Those who buy into this ideoogical and rhetorical template are fundamentally unable to understand or appreciate that success in America is NOT a zero-sum game. Success is open to all who are willing to work for it, because America recognizes that you are free to pursue your life as you see fit.

At least it used to.

As long as Republicans buy into the left's ideological template, they will fail--because quite frankly, they cannot win at this bigotry game for one simple reason: the left has made it their mission to spread the propaganda that the source of all the oppression and victimization is from the right. They have the media and the Academy on their side, because both have been steeped in this toxic distortion for decades now.

The only way to escape this insidious PC box that has been erected around American thinking is to reject the narrative that has been foisted on us by the left. Reject the left's new and socially acceptable bigotry--which would be Martin Luther King's worse nightmare.

Make it the Republican goal to reasonably and carefully point out all the unbelievable contradicitons and cognitive dissonance of these regressive thugs of the left who have taken over the Democratic Party and deformed it so that it is unrecognizable and no longer stands for life, liberty and the pursuit of happiness. Democrats don't even stand for "Big" Government anymore --they stand for Humongous Government, and a slow and steady slide into socialism and collectivism.

The Republicans can be the party of the individual. It can once again stand up for Freedom and economic liberty. It can stand for the values of personal responsibility, honesty, integrity and hard work.

Reject Multiculturalism. Reject Political Correctness. Reject identity politics. Reject moral relativism. Speak to Americans as individuals who each have their own dream and show them how embracing your Party can give them the opportunity to be free to achieve that dream by cutting Humongous Government and decreasing their taxes. By treating them as responsible adults and not as helpless children or pathetic victims.

UPDATE: Victor Davis Hanson asks, "Is it going to be race and resentment--all the time?" Well, yes. If the left has its way.
Posted by Dr. Sanity at 6:17 AM