THEY'RE JUST NOT THAT INTO YOU, OBAMA

The latest on the "hot dog" diplomacy promoted by the hot dog-in-Chief:

From a State Department briefing yesterday:

QUESTION: This isn’t a frivolous question, really. Do you think it’s still appropriate to have Iranians come to these July 4th parties under the circumstances? I mean, is there any thought being given to like, rescinding invitations?

MR. KELLY: No, there’s no thought to rescinding the invitations to Iranian diplomats.

QUESTION: It’s appropriate to have a social dialogue with them if they come?

MR. KELLY: Well, we have made a strategic decision to engage on a number of fronts with Iran, and we tried many years of isolation and we’re pursuing a different path now.

QUESTION: Have they said yes?

QUESTION: The President keeps saying that —

Putting aside that the Iranian regime is just not that into Obama reaching out begging them to like him, the moral aspects of Obama's suck up to the Mullahs should be front and center.

America, are you proud of this behavior?

Are you proud to be hosting a bunch of murderous, lying thugs on our national holiday of freedom and liberty? Are you proud of Obama's simpering, fawning behavior when it comes to the Iranian "Supreme" Leader? Maybe all we needed to do with Saddam was to invite him for coffee and donuts at the White House to seduce him into change his genocidal ways?

Lefties are all in a snit about the hypocrisy of Ensign's sex scandal because he dared to champion family values while he was having an extramarital affair.... I don't deny his hypocrisy on the issue, but frankly, I don't care much about it either.

Ensign sold out his own personal values and is rightly being taken to task for it.

OTOH, isn't it hypocrisy to the ultimate degree to be the President of a country that prides itself on the values of Life, Liberty and the Pursuit of Happiness ,to have intercourse with representatives of a regime that stands for the opposite???

That is selling out an entire country's values--big time.

Not only is Obama's behavior an example of breathtaking immorality by someone who supposedly champions America; but the meta-hypocrisy of all the postmodern demagogues of the left is mind-boggling. They are all desperate to find something they can use for their campaigns of personal destruction directed against any and all Republicans(did you know it's "bizarre" to go hiking alone--which is only one of many leftist speculations about Governor Sanford; but perfectly normal and laudable to angrily accuse the CIA of lying to Congress to CYA and without any evidence to support it?); but unconcernedly shrug off the massive hypocrisy of major Democrats (like Pelosi, Reid, Dodd, Frank, Jefferson, and the saintly Obama to name just a few) because they are all completely shameless about their behavior.

Like a teenage girl shamelessly pursuing a boy who could care less about her--or, for that matter, like any primitive shame culture--the left continually pretends that if they don't notice reality, it will go away.

How do people like Obama, Pelosi, Dodd and Frank et al get away with their hypocrisies? When I said 'shameless', I was being precise:

The purpose of guilt is to stop behavior that violates a self, family or societal standard. Guilt keeps score on excesses or deficits of behavior deemed undesirable and is expressed in regret and remorse.

Most psychological theorists (Erikson, Freud, Kohut) see shame as a more “primitive” emotion (since it impacts one’s basic sense of self) compared to guilt, which is developed later in the maturation of the self. Without the development of guilt there is no development of a real social conscience....

In thinking about how the concepts of guilt and shame apply in a culture (NOTE: e.g., the culture of the political left, whose members never admit to wrongdoing--no matter how blatant or obvious it is; vs the culture of the right, whose members acknowledge it and take their lumps accordingly) it is helpful to refer to a seminal work that was originally published by Benedict in 1946, where she discussed the collectivist culture of Japan during WWII and distinguished it from American culture. Japan had a “shame culture”, while the U.S. and most of the West subscribe to a “guilt culture”. Each type of culture has its own set of rules with regard to wrong-doing and they are determined by the beliefs of the individual and other people regarding guilt, and summarized in the two matrix tables below:

The difference in the two societies lies in the other two boxes in the matrix (in red).

In a guilt culture, when an individual believes he is NOT GUILTY, he will defend his innocence aggressively despite the fact that others believe he is guilty. In this case, the individual self is strong and able to maintain an independent judgement even if every other person is convinced of his guilt. The self is able to stand alone and fight for truth, secure in the knowledge that the individual is innocent.

The guilt culture is typically and primarily concerned with truth, justice, and the preservation of individual rights. As we noted earlier, the emotion of guilt is what keeps a person from behavior that goes against his/her own code of conduct as well as the culture’s. Excessive guilt can, of course, also be pathological. I am solely referring to a psychologically healthy appreciation of guilt. 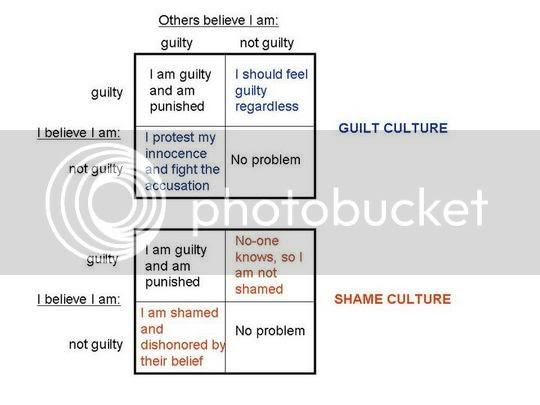 In contrast, in a typical shame culture (e.g., Japan as discussed by Benedict; or the present focus of this discussion: Arab/Islamic culture) what other people believe has a far more powerful impact on behavior than even what the individual believes. As noted by Gutman in his writings, the desire to preserve honor and avoid shame to the exclusion of all else is one of the primary foundations of the culture. This desire has the side-effect of giving the individual carte blanche to engage in wrong-doing as long as no-one knows about it, or knows he is involved.

Additionally, it may be impossible for an individual to even admit to himself that he is guilty (even when he is) particularly when everyone else considers him to be guilty because of the shame involved. As long as others remain convinced he is innocent, the individuals does not experience either guilt or shame. A great deal of effort therefore goes into making sure that others are convinced of your innocence (even if you are guilty).

In general, it has been noted that the shame culture works best within a collectivist society, although it can exist in pockets even within a predominant guilt culture.

Now you understand why the left hysterically and loudly condemns Republicans like Ensign; but is absolutely silent (and deaf) when it comes to the wrongdoings of Democrats and those on the left (who you may notice rarely resign or even admit to any guilt or shame).

Obama shamelessly throws himself at the Iranian Mullahs who want nothing to do with him, and betrays his country's values without a lick of remorse; but we're supposed to get worked up about Senator Ensign having an affair with a staffer?

Ensign at least, had enough integrity left to acknowledge his moral transgression and act accordingly. Obama and the other moral relativists of the left understand that being a postmodern zombie means never having to say you're sorry. 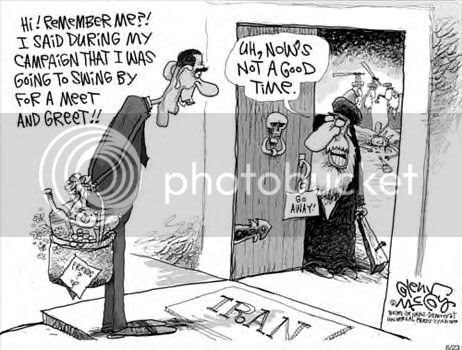 [Cartoons by Glenn McCoy]
Posted by Dr. Sanity at 5:34 AM