THE LEFT LEGITIMIZES ANTI-SEMITISM EVERY DAY

Ace has noticed something that, for some strange and unfathomable reason, the mainstream media have overlooked:

Obama: We Must be Vigilant Against Anti-Semetism, But No Way in Hell Could I Possibly Chastise My Former Spirtual Advisor: Vigilance begins in the home, dickbag.
Barack Obama, Resident of the United States:

"This outrageous act reminds us that we must remain vigilant against anti-Semitism and prejudice in all its forms. No American institution is more important to this effort than the Holocaust Museum, and no act of violence will diminish our determination to honor those who were lost by building a more peaceful and tolerant world."

This is so obvious I hate saying it, but yeah: You think the media might notice this if the President whose spiritual advisor was making anti-semitic remarks even as he calls for "vigilance against anti-semitism" were a Republican?

Now, ask yourself why this has not been a connection made in the MSM? Here's the answer: if the MSM were to mention Wright's hate speech in the same article as Obama's comments about anti-semitism, then several things would suddenly leap out at the reader:

1. Obama sat passively for twenty years listing to this hate-monger in church; but now says, "We must be vigilant against anti-semitism." Somehow, in spite of his well-publicized visit to Buchenwald, you might begin to wonder about Obama's personal "vigilance" in this area.

2. The attempts by the left to assert that the Holocaust Museum shooter was somehow one of those "right wing nuts" becomes mere wishful thinking and almost delusional:

Weird, huh? What possible grievance could a Jew-hating 9/11 Truther who ranted about Bill O’Reilly and “neocons” have against a magazine owned by Rupert Murdoch and edited by Bill Kristol? Maybe he detected a leftward drift in the Standard’s editorial slant lately? You know how irascible those “right-wingers” can be, especially when they’re fed a steady diet of Fox News. Which, um, Von Brunn hated. 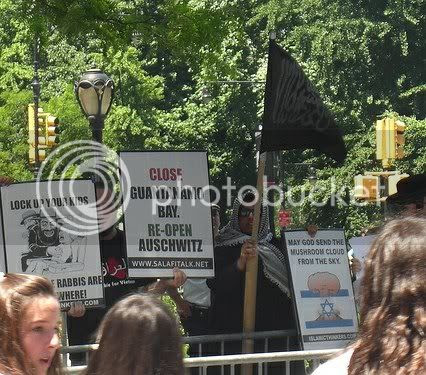 The left may not have noticed this little fact (they are in denial about their pervasive racism, sexism etc. after all), but they OWN anti-semitism these days.

From an article by Philip J. Spencer in Spiked:

There are a number of ways in which much of the left now refuses to engage seriously with anti-Semitism but rather helps to legitimate it. The first takes the form of explaining anti-Semitism in a way that effectively justifies it. This occurs when, for example, suicide bombing (that is, the deliberate killing of Jewish civilians) is explained in a pseudo-materialist mode as simply a product of desperation. That many people have found themselves desperate without resorting to such actions and such hatred is ignored, as is the obvious fact that they are planned by people who are certainly anti-Semitic but not by any stretch of the imagination hopeless or without considerable material resources.

The second form is collusion – the effective toleration of anti-Semitic language, chants and slogans on demonstrations against Israel. I say ‘effective’ because this is a repeated and growing phenomenon, known in advance. It does not require an occasional well-meaning reproof but the recognition that joint participation in, and organisation of, such demonstrations provides a forum for anti-Semites to express their hatred of Jews without fear or anxiety. (It is in this respect a direct reversal of the old socialist programme of ‘no platform for fascists’.)

The third way in which the left helps to legitimise anti-Semitism, and this often accompanies the first two, has to do with the downplaying of evidence of anti-Semitism itself: the claim that anti-Semitic incidents are over-reported or misinterpreted and that, in any case, they are far less significant than other forms of hatred.

How new is all this? Perhaps it is not quite as new as we might wish, especially if we think about the left’s response to Nazi anti-Semitism. There is a certain ‘conceit’ on the left (one I confess I shared myself for a long time) that they were the most principled, committed opponents of Nazi anti-Semitism. This is highly arguable. In Germany in the 1930s, many left-wing intellectuals took an entirely reductive view of Nazi anti-Semitism. As late as 1939, for example, Max Horkheimer claimed that what was really going on was that ‘the Jews are being supplanted as agents of circulation, for the modern economic structure eliminates the entire sphere of commerce’.

In 1942 (just as the Final Solution was under way) Franz Neumann published his major study of Nazism in which he argued that they would ‘never allow a complete extermination of the Jews’. What the left did oppose was fascism, for which they had a much more sophisticated explanation, and which was a priority. For on the ground, too, mobilising against anti-Semitism as a central issue was repeatedly rejected - by both social democrats and communists. To raise this issue, leaders of both parties agreed, was pointless and counter-productive. It would not win support but would further isolate their militants. And there was more than a hidden suggestion that the Jews had somehow brought this upon themselves, that they had been too visible, too prominent, or worse.

Ignorant efforts to equate what happened to the Jews during Nazi rule with what Israel is doing to the Palestinians may be thought about, to some extent, against this background of incomprehension and avoidance. It is true that what happened then remains hard to comprehend even today. The idea that the Nazis wanted to kill all Jews everywhere is hard to hold in the mind, as (even more) is the creation of extermination camps; factories designed not to produce goods or commodities but corpses and ashes, factories of death.

But if there is little history of thinking seriously about anti-Semitism and confronting it directly when it was at its most dangerous, it may not be so surprising that there has been such a weak response to the latest outbreak of this mutating virus. It was easier then to turn away, to deny the full import of anti-Semitism in its most radical form; it is easier now not to think about anti-Semitism at all.

Remember this the next time you listen to your leftist friends legitimize Palestinian suicide missions against Israel. Remember it when you when you see the President of the US sucking up to Iran whose leaders have promised to "wipe Israel off the map." Remember it next time you watch the antics of the supposedly "anti-war" left--who are not so much anti-war as they are anti-American and profoundly anti-Israel. Remember it as you watch resolution after resolution come out of the United Nations denouncing Israel--particularly the so-called "human rights" council, which Obama has recently re-legitimized and acknowledged.

Indeed, be vigilant against anti-semitism like our amazingly two-faced President says. And also, watch very carefully where it is coming from these days....
Posted by Dr. Sanity at 6:18 AM