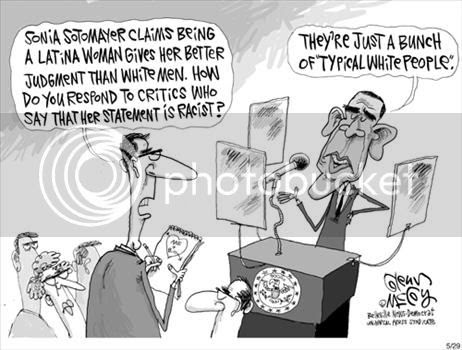 I don't happen to think Sotomayor is necessarily aracist, but clearly some of her statements (and possibly her jurisprudence) are tinged with the casual kind of racism that is so prevalent on the left.

By virtue of being a member of the left's victimhood groups (two actually), Sotomayor is likely of the opinion that she--BY DEFINITION--is not capable of being a racist. In the weakened minds of the left, disabled as they are by the slow cognitive deterioration that accompanies postmodernism, abstraction and universals are too abstract for them. Like many of the champions of victimhood, she reserves the word to describe those who happen to disagree with her so that she can feel superior to them.

If you want to understand how that leftist tactic has penetrated deeply into the culture, let me tell you a personal story. Recently, I was involved in an animated discussion with my daughter about her schoolwork. Things got a little heated, and in typical teenage fashion she became flustered when I pointed out some facts about her study habits that she did not like.

Somewhat taken aback at the insertion of this word into our conversation, I must have momentarily appeared deeply shocked, because she abruptly started laughing and the tension was broken. Which, of course, made me laugh too at the ridiculousness of her words.

Still laughing, she said that she had learned at school that the best way to end a discussion you did not like was to accuse the other person of being a 'racist', 'sexist' or 'homophobe.' "Calling someone one of those names is a sure way to end the discussion," she explained with a smile. "Kids at school use it all the time."

I saw her point. Being called a racist is enough to give anyone with a modicum of sensitivity pause; coming from my daughter and in the context of our argument temporarily left me speechless; and it had the effect of actually terminating the discussion I was trying to have with her about her poor study habits. How sad that this kind of ad hominem attack has been picked up by young people; but clearly even they recognize its usefulness as a rhetorical attack in an argument they know they cannot win.

...[P]ostmodernists need not believe much of what they say. The word games and mmuch of the use of anger and rage that are characteristic of much of their style can be a matter--not of using words to state things that they think are true--but rather of using words as weapons against an enemy that they still hope to destroy.

Hicks goes on later to say:

In adopting this rhetorical strategy, do you really have to believe that everything is a matter of opinion or merely semantics? No, you do not. You can believe absolutely that you are right about the politics; and you can know that all you want to di is to use words to get the guy off your back in a way that makes it seem like you have not lost the argument.

On some level, my daughter understood the absurdity of what she had uttered, but she also understood the effectiveness of calling someone a racist--or a sexist or a homophobe--and knew that it was a conversational show-stopper. End of argument.

Because of this postmodern rhetorical reality, terms like this (and many other words) have truly lost their real meaning. Instead of describing people (like Sotomayor, for example) who base their judgments of other's on the color of their skin or ethnic background, rather than the content of their character, 'racist' is a term that is constantly used by the left to label opponents to their 'progressive' policies.

Oppose some new leftist entitlement (or try to cut back on the old ones that only continually perpetuate themselves and don't really help people in the long-term) and watch the accusations of oppression be hurled at you. You will be told that you 'hate' the poor; the old; Blacks; gays, hispanics etc. etc. etc.

I am no stranger to such accusations. I happen to think (and have evidence in the real world to document my thoughts) that the free market has pulled, and will continue to pull, the poor out of poverty and misery; and that impeding market forces through government action will, in the long run, hurt the poor most of all. Because I defend that idea, I am routinely labeled as someone who "hates" the poor and often as a 'latent' racist.

I think that Sotomayor's comment is racist, but because she's part of a protected victimhood group and is therefore given carte blanche to express her own racist beliefs. No matter, since I am the one who must be racist. End of discussion.

The truth is that for all the lip service the Left pays to "fighting poverty" and "achieving social justice"--which makes them feel just oh so good about themselves--that not one single government program they have supported in the endless bureaucratic quagmire they refer to as the "war on poverty" has done more than those evil corporate bastards at WalMart to actually help the poor or anyone who suffers from the left's favorite disease: oppression.

Instead, the programs they support nationally and internationally inevitably reinforce their own latent envy, racism, and sociopathic selflessness.

So, many times in politics, programs that originate with the "best of intentions"--to help the poor; to achieve equality; to end some perceived injustice-- end up doing exactly the opposite of what was intended. This is the ultimate irony of a belief in egalatarianism, which holds that all outcomes must be the same for there to be "social justice". In the old Soviet Union and in Cuba we have a perfect example of the success of the egalatarian model. Everyone is equally poor and miserable. The 'poor' in America have a degree of wealth and opportunity that is unrivaled anywhere else in the world where they embrace egalatarianism.

Yet, the political left is so ideologically committed to the utopian ideal of egalitarianism which, in the real world simply makes everyone equally poor and miserable (except for the lucky elites who control the social system) that they reflexly keep pouring money into programs that can be shown to actively harm the people they are meant to help; and reinforce the stereotypes they are meant to end. That's why the left, who are in complete denial about their own racism, sexism and homophobia end up doing so much to hurt the people they claim to champion. Instead of having a color-blind society, they will create a society where the sanctioned color, race, ethnicity or lifestyle always trump ability, performance, and character.

That's how a supposedly "post-racial" candidate Obama, who promised to end racial stereotypes has now become one of the biggest proponents of them. 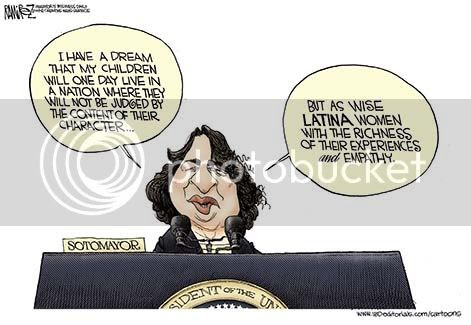 Victor Davis Hanson writes in a post titled "When Words Don't Mean Anything":

Rather than an attempt to defend empirically Sotomayor's suggestion that Latinas are superior, in the judicial sense, to white men, we have been given a variety of postmodern contexts, constructing what she "really" meant: She was merely talking about the advantages of poverty that she thinks she has experienced that are not true of white men; she was only "joking"; she was making an intricate case for diversity, etc. — any explanation other than the natural one that was elaborated on later in her diatribe, namely that she believes the color and gender of a person impart wisdom or less than wisdom.

With the advent of Obamaworld, the centrist veneer sometimes rubs off the race/class/gender/religion talk and we see the fundamentalism in its essence — in the impromptu moments of the campaign it was Michelle's "mean country" and first-time pride in the U.S., Obama's "typical white person," Pennsylvania clingers, and original contorted defense of Reverend Wright, then there was Eric Holder's "cowards"
outburst, and now Sotomayor's Latina tribalism.

In each case, once the race/class/gender animosity is revealed, there is a brief hesititation to see how well the media will come to the rescue and "contextualize" the remark, and when that fails there is the obligatory qualifier "maybe not the best way of putting it," "wrong word," "if I had to say it over, I'd . . ." The point being that, in the D.C. gotcha culture, these are never gotchas due to the race, gender, or class of the perpetrator (sort of like the schizophrenic attitude toward plagiarism that exempts a Maureen Dowd, or Joe Biden, or intolerance of supernatural religion that ignores an Arianna Huffington's John-Roger or Hillary séances with Eleanor Roosevelt).

I think the unifying explanation is that such wonderful people either simply are incapable of racialist remarks, or that the good that they otherwise stand for so overshadows the embarrassments as to make them not embarrassments at all.

I'm afraid I fail to see the overwhelming 'good' that Sotomayer has done that should overshadow justified criticism of her flawed--and apparently racially motivated-- judicial thinking. I, perhaps like Obama's 'typical white person' grandmother (except I am of Italian descent), hold these truths to be self-evident, that all men are created equal, that they are endowed by their Creator with certain unalienable rights, that among these are life, liberty and the pursuit of happiness.

After that--no matter whether they are black, white, brown, or green-- they are on their own.
Posted by Dr. Sanity at 6:09 AM