This cartoon captures exactly what I was saying the other day about Ms. Hillary, whose "split personality" alternates between the "Wonder Woman" persona and the "Little Bo Peep" one, depending on which is most advantageous in the moment:

I can hear people saying now, "Oh, Doc that's not fair! She's a person in her own right..." Exactly. I don't like that person. I don't like how she's used her relationship to a powerful man to leverage her own power. There are brilliant, capable women out there who could do a superb job as the leader of the free world, and who have never, ever used their marriage or relationship with any man--, either positively or negatively to get ahead. And Hillary does both--she plays the "Bill card" to push how much experience and qualifications she has to be president; and at the same time routinely plays the "victim card"--poor little woman burdened with an unfaithful man; or poor little woman abused by the oppressive male power structure--whenever it suits her purposes. Yuck and double yuck.

I'd just as soon vote for Monica Lewinsky for President. 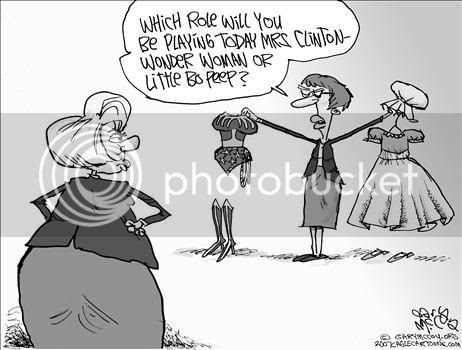