This must really irk many on the political left in the same way any success in Iraq does:

Scientists have made ordinary human skin cells take on the chameleon-like powers of embryonic stem cells, a startling breakthrough that might someday deliver the medical payoffs of embryo cloning without the controversy.

Laboratory teams on two continents report success in a pair of landmark papers released Tuesday. It's a neck-and-neck finish to a race that made headlines five months ago, when scientists announced that the feat had been accomplished in mice.

The "direct reprogramming" technique avoids the swarm of ethical, political and practical obstacles that have stymied attempts to produce human stem cells by cloning embryos.

Some will say it is unfair of me to suggest that there are quite a few people upset at the above development, but like Kevin Drum, they are far too indulgent toward those well-meaning and oh so caring persons of the leftist persuasion. Without a doubt, there are a sizable number who are deeply committed to the wonderful causes of the left (call them the lunatic fringe, if you like), who "prefer embryonic research for its own sake and will keep fighting for it even if this new approach proves itself completely successful. But why? Inertia? Political bloody mindedness? A demonic delight in destroying embryos for its own sake?"

No, none of the above actually.

In case it has escaped Drum's notice, there are many who take such "a demonic delight in destroying" and dismissing anything at all related to George W. Bush, that they long ago lost all perspective, reason and sanity about such things--i.e., they suffer from BDS, which I long ago came to appreciate is a real political psychological disorder that describes a real pathological phenomenon of our time and is not simply a clever witticism.

This political pathology has had such a major impact on some people's cognitive functioning capabilities, they will not be able to cope with the possibility that anything supported by Bush might triumph.

The President is, after all, the real enemy that must be defeated--they have based their entire world view, as well as their definition of who they are, on that belief.

I offer apologies to the few leftists still able to think clearly about any issue which might show the evil and despised Bu$Hitler or his policies in a (gasp) positive light. 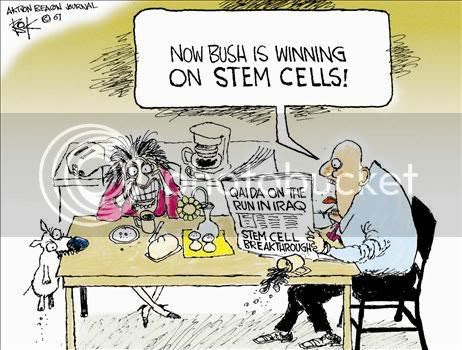