Whew, that was a close one. We suffered a big attack and were in mortal danger for a while, but we are safe now. Thank God, the war on terror is over. There are no Islamic extremists. Homeland security is not an issue. The only problem in Iraq is how to get out.

Wait, this is news to you? Then you didn't watch the Democratic debate Thursday. Or maybe you did watch, but since those unpleasant topics were completely or mostly ignored, you assumed the war was over and went to bed believing peace is at hand and Santa Claus is busy making toys at the North Pole.

It's not your fault. It's the Democratic presidential candidates who are sleepwalking through history.

Actually, it would be more accurate to say that the political left in this country is rewriting history and that the Democratic candidates are willing to go along with the rewrite as long as they think it will help them regain power. They have shrewdly calculated that a large majority of Americans would prefer to pretend that there is no danger; there is no war; and that everything would be hunky dory if it weren't for that Republican monster in the White House.

My goodness how the nation has suffered over the last 7 years!

The Constitution is practically in shreds and every day Hollywood stars are being imprisoned for their courageous efforts to stand against the evil Darth Cheney and BusHitler. Those Christofascists have taken over and we are all forced to go to church, praise the Lord, and carry to term those pestiferous unwanted babies. Everywhere, gays and women are persecuted and oppressed.

The economy is obviously in the toilet, and if it weren't for all those ridiculous economic indicators that have shown it is strong and growing, we'd all be in the poor house. Even though Bush said at the outset that this would not be a short or easy war, WE'RE STILL FIGHTING IT! Bush must have lied. How insane is that?

And, let's not forget the historically large numbers of troops who have been killed fighting an enemy against whom it is just not possible to win! Doesn't that moron Bush know that people die in wars and that the war is LOST? What a monster. And not only are those poor, oppressed suffering troops dying for a lost cause, they are also raping, pillaging and torturing innocent civilians (just go to the movies and you'll see it all there in black and white and color).

What about our deteriorating our national image and alliances! Ruined and in tatters. The French and Germans [used to] hate us. The UN always seems to be very pissed off at America; as are almost all those peace-loving, terror-sponsoring states in the Middle East and around the world! We'll be lucky if we ever get our credibility back.

And don't forget that the fabulous international star and politician extraordinaire, Hugo Chavez, doesn't like us either! Now here's a man who is tearing up his country's constitution in the proper socialist manner.

Clearly the only solution to all these horrible problems is to Get. Rid. of. Bush., Get. Out. of. Iraq., and Elect A Democrat. Only then can we go back to the peaceful sleep of the Clinton WonderYears.

In my profession, this strategy used to be referred to as psychological denial, but these days postmodern pundits of the left egged on by psychology eLITEists have repackaged psychological blindness as reality-based progressivism.

Not only are these people sleepwalking through history, but they are sleepwalking backwards through history, trying to return to those thrilling days of yesteryear when they were firmly ensconced in the seat of power and "dealing with terrorism" and "being tough on terrorists" was simply a matter of bombing a few aspirin factories in the 3rd world and standing up to Saddam Hussein. Whatever.

It made so much more sense when Bill Clinton did it and said it; and his tough actions prevented any attacks from happening in the U.S., didn't it?

Real history moves forward in time, not backwards; and the implications and consequences of what happens today can't always be assessed for years to come....but you try to stay awake and do the best you can in the moment.

Goodwin concludes with this observation:

...one woman [told] USA Today that Germany's refusal to fight in Iraq lulled the country into thinking Islamic terrorists would focus elsewhere; "we assumed that if we behaved well in the world, nothing would happen to us," the woman said.

Ah, if that woman lived here, she could run for President of the United States. I know which party would have made her feel right at home.

Psychological denial can make you feel good in the short-term--that's why it is a coping mechanism that will never go out of style.

But it can also be the death of you. 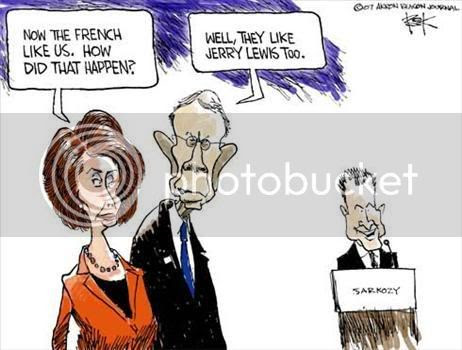