THERE'S HYPOCRISY; AND THEN THERE'S META-HYPOCRISY

Wretchard has a rather nice post wondering how low can they go:

Watching recent events in partisan politics seems a little like watching the Limbo Rock. How low can you go? Pretty low. On the Republican side you have the Larry Craig incident, where a GOP Senator from Idaho is arrested while playing footsie with an undercover cop in a toilet stall at a Minneapolis airport. You know things are about as bad as they can be when Congressman Barney Frank wants to be your friend....

Tough to beat that, huh? Apparently going lower is no problem in Washington. The counterpart horror show on the Democratic side of the aisle is the Norman Hsu affair. Norman Hsu, a known fugitive who appeared at Democratic fundraisers everywhere (and who has just now turned himself in), funneled $400,000 in campaign contributions to the Democratic party through the family of a mail carrier, William Paw, whose modest means were belied by his hefty contributions -- if indeed they were his. One of Belmont's regular commenters, AJacksonian, compiled this impressive roundup, which you might call the Who's Who of Norman Hsu. As the Righteous Brothers should have sung, "You've got that sinking feeling. Woah that sinking feelin."

I am not someone who happens to believes hypocrisy is confined to one side of the political spectrum or the other. It is clear that it exists on both. Nevertheless, there are some distinctions that can be made.

In particular, an interesting observation was during an interview in 2005 with Peter Schweitzer , author of the book Do As I Say (Not As I Do): Profiles in Liberal Hypocrisy. Schweitzer makes a distinction between liberal vs. conservative hypocrisy:

Yes, we are all hypocrites and I talk about that in the book. But liberal hypocrisy and conservative hypocrisy are quite different on two accounts. First, you hear about conservative hypocrisy all the time. A pro-family congressman caught in an extramarital affair, a minister caught in the same. This stuff is exposed by the media all the time. The leaders of the liberal-Left get a complete pass on their hypocrisy. Second, and this is even more important, the consequences of liberal hypocrisy are different than for the conservative variety. When conservatives abandon their principles and become hypocrites, they end up hurting themselves and their families. Conservative principles are like guard rails on a winding road. They are irritating but fundamentally good for you. Liberal hypocrisy is the opposite. When the liberal-left abandon their principles and become hypocrites, they actually improve their lives. Their kids end up in better schools, they have more money, and their families are more content. They're ideas are truly that bad.

This observation seems to hold true with almost all the recent scandals that have received big play in the media. So it is worth remembering certain Democratic hypocrisies--which somehow never seem to receive as prominent a place in today's media or reach the level of public awareness that those involving Republicans do.

SC&A has helpfully put together a list of such scandals and the people involved; and many of the examples seem to follow Schweitzer's rule.

In fact, what we begin to see is a sort of "meta-hypocrisy" that defines Democratic behavior. Gagdad Bob notes:

Maher clearly regards himself not as pathetic or immature, but “sophisticated” and far beyond the narrow minds of cultural conservatives. He has even made the idiotic statement that Republicans are only concerned with sexual propriety “because they’re bad at it.” Here is the actual quote: “This is always what happens with that Republican party. They are somehow able to conflate real morals and values with sex. Because they're Republicans, Larry. They're bad at sex. They're pasty, unattractive white people, and if you had to have sex with them it would be over in an excruciating three minutes. So what they always like to do is conflate sex with morals." That is typical of the “sophisticated” attitude of the left. Only those who are moral relativists and who have no standards at all, are fit to pronounce on those who do.

The meta-hypocrisy, or the rampant hypocrisy over their own hypocrisy, becomes evident when you realize that even as they "mainstream deviance and perversity" of all sorts, the Democrats very badly also want to be the party of "family values" in America

Thus, they claim to support Gay Rights (but onlyfor those who ae "openly" gay--not those "closeted" perverts--who they seem to think are all Republicans) and want to advance the gay cause in all social areas, but at the same time they just happen to have a certain list that was coyly mentioned by David Corn during the Mark Foley scandal, and described by Vanderleun thusly:

...the rich and full aroma of deep irony revolves around what can only be seen as a Democratic initiated and driven effort to purge Congress at all levels of homosexuals because they are, well, Republicans or work for same. Coming from a party that is first and foremost about advancing gay and lesbian rights on all fronts, it seems especially shameful that -- to settle all their old scores and gripes and grievances -- they are going willing to sacrifice the lives, careers and reputations of their fellow Americans on the altar of their derangement.

It is extremely ironic, isn't it? And brought home once again by gleeful and unseemly leering over the Craig debacle. The left simply hates hypocrisy--except when it is one of their own preaching enviromental values but living in 28,000 square foot palaces; or one of their own being arrested for hiding bribes in freezers, etc. etc.

On the one hand there is a certain kind of hypocrisy, defined as not living up to the values that one espouses; and then there is what I would call meta-hypocrisy, or not having any real values to live up to in the first place, but self-righteously appropriating some when it is expedient to do so. 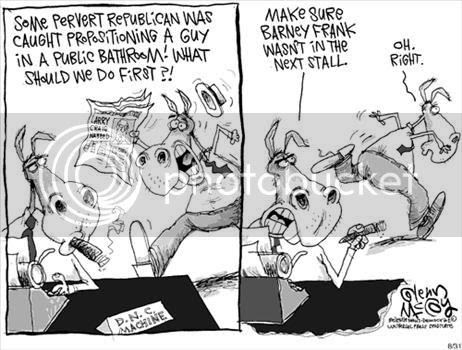