Life is all about choices.

In Harry Potter and the Chamber of Secrets, Dumbledore says, "It is our choices, Harry, that show what we truly are, far more than our abilities." (page 333).

William Kristol has written a piece that elegantly demonstrates the the truth of that statement; "Ahmadinejad Yes, ROTC NO":

So at the request of the Iranian government, Columbia University will host the president of a terrorist regime which is right now responsible for the deaths of American soldiers on the field of battle. Indeed, this distinguished guest, who is so honoring Columbia by his presence, will be introduced by no one less than the president of Columbia, Lee Bollinger.

But not to worry: "President Bollinger will introduce the event by challenging President Ahmadinejad on a number of his controversial statements and his government's policies."
[...]
One can imagine President Ahmadinejad nervously preparing for President Bollinger's "sharp challenges," and wondering whether those challenges will detract from the propaganda victory Bollinger's invitation has given him. He's undoubtedly concluded it won't be a big problem.

Indeed, the Iranian President must be rolling on the floor laughing along with the Mullahs about the incredible victory handed to them by the morally bankrupt Bollinger, a man who symbolizes all that is most nauseating about the political left today.

ROTC at Columbia has been banned since the 60's, and Bollinger was instrumental in keeping it off campus, despite a majority of students who thought it should be allowed back. In the minds of the "peaceful, loving, compassionate and gentle" left, the ROTC stands for the evil military and all those associated imperialist/capitalist warmongers of the West.

And, like Kristol, I suggest that this choice demonstrates for anyone who cares to think about it what the political left "truly is" in spite of all its self-proclaimed intellectual 'superiority.'

In a comment to my post yesterday on the marriage of Islam and Marxism, Gagdad Bob of One Cosmos notes a fundamental psychodynamic reality of that union:

"You might say that the Islamists act out the split off unconscious aggressive impulses of the intellectual left, while the left provides conscious intellectual justification for the aggression -- like two half-wits embracing their missing half."

ShrinkWrapped refers to the phenomenon as the "unmetabolized rage" of Islam and Marxism, "who have difficulty modulating and reality testing their anger...."

The result of all this unacknowledged, but nevertheless, potent and destructive rage is the selfish psychopath and his enabling moral counterpart, the selfless psychopath.

Half-wit Ahmadinejad, may I introduce you to half-wit Bollinger?

UPDATE: As usual, Eric Allie captures the essence of the left's insanity: 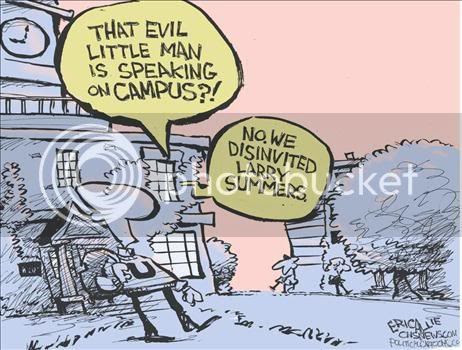