We all know that the mullahs of Iran just wants peace, and that must be why they are ratcheting up the rhetoric:

Six hundred Iranian Shihab-3 missiles are pointed at targets throughout Israel, and will be launched if either Iran or Syria are attacked, an Iranian website affiliated with the regime reported on Monday.

"Iran will shoot at Israel 600 missiles if it is attacked," the Iranian news website, Assar Iran, reported. "600 missiles will only be the first reaction."

According to the report, dozens of locations throughout Iraq, which are being used by the US Army, have also been targeted.

The Shihab missile has a range of 1,300 km, and can reach anywhere in Israel.

On Sunday, French Foreign Minister Bernard Kouchner said that the nuclear Iranian crisis forces the world "to prepare for the worst," and said that in this case it "is war."

And, if you remember, they've been helping out in Gaza and Lebanon, too. What a bunch of swell guys! The left loves 'em (at least in comparison to the warmongering "psychopathic personalities" of the West--wink,wink, you know who they mean!)

Professionally, I can't decide which group is more psychotic and out of touch with reality --the Iranian mullahs 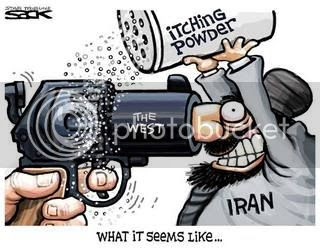 A folie a deux is certainly not out of the diagnostic picture.