In this case, the hounds have gone to ground.... or at least into the mud: 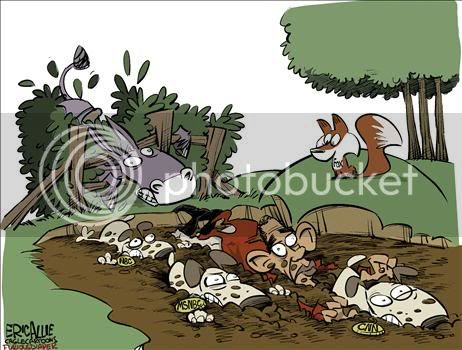 The real reason the White House is so obsessed with discrediting FoxNews:

This seems so obviously correct that I feel embarrassed for not having figured it out sooner.
The rationale of the White House offensive against Fox News has been a topic of much puzzlement lately. Is this just the White House lashing out? Are they trying to rally the base?
But I think Mike Allen and Josh Gerstein nail the real explanation in their story today: The White House is working to prevent stories born on Fox from crossing over into more widely-viewed media. Most Americans still haven’t heard of Van Jones, for instance; and the strategy is now all about containment…

...Both Politico and Mediaite note that the expected righteous indignation at being lectured by politicians on what they should consider news is strangely absent from most of the press corps — with the important exception of Jake Tapper. Go figure. Even the reliably liberal Ruth Marcus felt obliged to wonder what the reaction would have been had Dubya declared war on MSNBC and encouraged other news outlets to ignore the nightly spiel on “Countdown.”

The White House has released the hounds, and all they will get from it is mud on their face.
Posted by Dr. Sanity at 7:41 PM