Republicans needn’t trouble themselves to nominate a presidential candidate in 2012. No matter what, Pres. Barack Obama will be running against George W. Bush.

Bush will be Obama’s eternal foil. At this rate, when Obama writes his post-presidential memoir, it will be titled: An Audacious Presidency, or How I Saved America from That Bastard Bush. His presidential library will have a special fright-house wing devoted to Bush’s misrule. He will mutter in his senescence about 43, like the Ancient Mariner about his albatross.

Obama clearly wants Bush to be the Hoover to his FDR. Since his predecessor left office with 34 percent job approval, Obama understandably feels moved to scorn and berate him. But Obama’s perpetual campaign against Bush is graceless, whiny, and tin-eared. Must the leader of the free world — if Obama still accepts that quaint formulation — always reach for the convenient excuse?

The answer to that question is, "Yes, he can." Read it all. 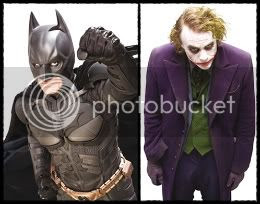 In this, Obama is indeed playing the role of the "Joker" to Bush's "Dark Knight". Of course, this shows my own prejudice because I do see Bush as deeply flawed, but essentially heroic; while Obama is a rather metrosexual villain who's turning out to be quite a scary joke on the international stage.

“Introduce a little anarchy, upset the established order, and everything becomes chaos, I’m an agent of chaos , and you know the thing about chaos? It’s fair.”- Joker (The Dark Knight 2008)

“Oh you… you just couldn’t let me go could you? This is what happens when an unstoppable force meets an immovable object. You are truly incorruptable aren’t you. You won’t kill me because of some misplaced sense of self-rightousness. And I won’t kill you because…you’re just too much fun. I get the feeling that you and I are destined to do this forever.” - Joker (The Dark Knight 2008)


Read all of Lowry's editorial. He concludes with this:

The acid test of the White House inevitably exposes a president’s character flaws: Nixon’s corrosive paranoia, Clinton’s self-destructive indiscipline, Bush’s stubborn defensiveness. Obama in the crucible is exhibiting an oddly self-pitying arrogance. It’s unbecoming in anyone, let alone the most powerful man on the planet.

ADDENDUM: I am not really of the opinion that Obama is actively evil like Batman's Joker. However, I do think that like many collectivists, he is what I call "selflessly" malignant. The Joker has far more insight into his own motivations and desires to create chaos and exert power over others. Selfless narcissists like Obama and his fawning acolytes are painfully clueless.
Posted by Dr. Sanity at 5:23 AM