You know, it is truly unseemly and utterly bizarre to hear media zombies like Jacob Weisberg rant against Fox News. This lunacy from a "journalist" who happens to be the author of a Bush-bashing book. Too too funny.

And, further, it is beyond unseemly--more like grossly un-presidential--to hear the White House spokesczars raging against its Fox News critics like some Hugo Chavez clowns trying to shut down any opposition TV stations.

Fox News is not really news?? Who says so, meathead? The first error that these yahoos make is in mistaking opinion for news. You can see this mix-up in thinking clearly by reading the NY Times on a regular basis. It's one of the reasons why the mainstream media is really not mainstream anymore.

Obviously these Fox-haters have listened to MSNBC or CNN and found them to be acceptable to the current regime, while Fox dares to question the godhead. Personally, I'll take Special Report with Bret Baier (previously with Brit Hume) anyday over any show on any other cable news station.

However, my likes or dislikes aren't relevant to the issue at hand--so don't just take my word for it. Objectively, as Dean's World reminds us, numerous studies and journalists confirm the media’s rampant sinestrophilia. And their most recent passion for Obama has been on display for all to see for more than a year.

From a psychological perspective, the behavior of the MSM in this as in so many other matters appears to be motivated by underlying ideological principles of which they are largely unaware; and because these ideological imperatives are unconscious, hardly any of these so-called "journalists" are able to appreciate the ideologically biased perspective they present when doing news stories, and convince themselves that they are just being neutral and factual.

They are not. And frankly, their bias is almost so unrelentingly left, that it is a relief for most people to go to Fox News where there is a semblance of "fair and balanced" (most issues have talking heads on both sides of an argument) . Indeed, there is a lot of right-leaning opinion--that is clearly labeled opinion and doesn't pretend to be news.

Obama wasn't really joking much when he told a group of radio and TV journalists recently that "Most of you covered me; all of you voted for me" --except for those at the Fox News table. Almost all of them probably did vote for him, and Obama knew it. Now, if only those difficult Fox News correspondents would fall into line, his ascension to godhood would be complete!

Beneath the conscious, deliberate bias and blatant manipulation of news for 'the good' of us all, is an uncritical, unthinking cognitive apparatus that has been virtually destroyed by years of academic propaganda-- to the point that many of these journalists simply regurgitate the Marxist talking points in which they have been marinating for several decades--without even recognizing them as such.

Instead, they believe that their behavior is truly motivated by a desire for 'social justice' and 'universal peace and brotherhood', without any intellectual understanding or appreciation of the origins of this rhetorical propaganda and the underlying ideology that infuses them. Who doesn't want justice and peace, for heaven's sake? The issue is the best way to make that happen in a rather imperfect world populated by rather imperfect human beings.

Many of these walking, talking advertisements for 21st century neo-marxist fascism--who laughingly call themselves "objective journalists"-- are nothing but the mindless zombies of a not-quite-dead Marxism/communism/socialism that rose from its 20th century grave. What gave new life to these moldering and rotting ideas that certainly deserved to die after the mass death and destruction they caused, was the energizing power of postmodern rhetoric, cultivated in the hallowed halls of academia, where the vampire elites had access to the unsuspecting children who came to learn.

Journalism schools today (along with many schools of education) are literally rotting from all the dead and toxic Marxist ideas that are part and parcel of their curriculum.

Instead of learning to think in those classrooms, students are indoctrinated into the ever-growing ranks of leftist zombies churned out by those institutions.

The zombies of the MSM (or "legacy" media) walk among us without hinderance; wreaking havoc and mindlessly mouthing the multicultural platitudes and encouraging the 'class struggle' and promoting Marxist envy--in other words, generally behaving like this undead ideology is some sort of beacon of "hope" or "change" for today's world. Is it any wonder that they have embraced Obama as if he were some sort of Lord of the Undead?

These political zombies and the vampire elites who control them, prey on the soul and eat the life force of free societies like ours. And sadly, most of us are like the utterly clueless Sean of the Dead; we go through our days fairly oblivious to the havoc they are causing, barely noticing that something is very wrong. Some scratch their head and can't put a finger on what is wrong, but gravitate toward a network like Fox, because they haven't been completely zombified; they aren't completely dead yet; and their minds are still seeking to make sense of the crazy world around them.

Eventually, even the hapless Sean of the Dead's perceptual and cognitive abilities finally kicked into gear and were able to override his narcissistic self-involvement and make him aware of the danger from the zombies all around him.

Godzilla and the many monsters in Japanese and American cinema were symbolic of the dangerous and frightening forces unleashed after WWII. In our own time, it is a increasing fascination with zombies and vampires--monsters which symbolize all the undead collectivists of the left; the communist and Marxist remnants, who are enjoying a revival today, thanks largely to the impact of postmodern rhetorical and political tactics.

Zombies and vampires are the perfect monsters for our day and age, and they effectively convey the horrifying mindlessness of the herd mentality combined with a rather nasty and overbearing intellectual elitism.

Between the zombies of the MSM and the vampire elites operating out of the White House, we are besieged by a rampaging horde of collectivist undead. 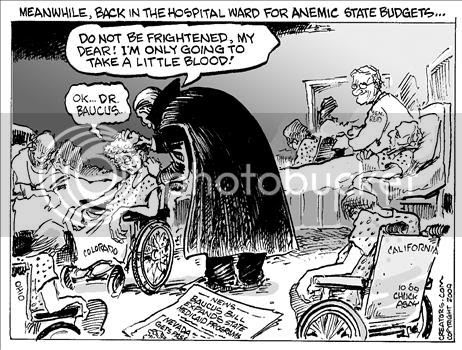 UPDATE: Jay Nordlinger has some thoughts on Fox vs CNN which are worth reading. He also makes this comment:

I keep hearing that Glenn Beck is just a blowhard opinionist, contributing nothing but hot air. If that is true, why do we keep learning news from him? About Van Jones, about ACORN, about Anita Dunn . . . I mean, isn’t that the New York Times’s job? No? What a strange era we’re living in.

UPDATE II: Want more evidence of how the media is being played? Check this out from the Mao-loving Dunn:

President Obama's presidential campaign focused on "making" the news media cover certain issues while rarely communicating anything to the press unless it was "controlled," White House Communications Director Anita Dunn disclosed to the Dominican government at a videotaped conference.

"Very rarely did we communicate through the press anything that we didn't absolutely control," said Dunn.

"One of the reasons we did so many of the David Plouffe videos was not just for our supporters, but also because it was a way for us to get our message out without having to actually talk to reporters," said Dunn, referring to Plouffe, who was Obama's chief campaign manager.

The zombies of the MSM are being played for the mindless fools they are. It's rather breathtakingly arrogant for Dunn to say this, like she was proud of it. Let's see if the zombies take this lying down.

UPDATE III: 6:20 PM - I just heard from Special Report on Fox that one of their reporters contacted CNN, NBC etc. and a number of individual reporters for comments on Anita Dunn's gloating about controlling the media. Not a single one would comment on the record. As I suspected, the zombies are going to take it lying down. Too busy feeding on the brains of their viewers to comment, I guess.
Posted by Dr. Sanity at 7:31 AM