The Virtue of Endurance

Jim Oberg, the best space analyst in the media, has written a terrific and comprehensive history of Space Station Alpha (the article has links to over two dozen detailed articles on various themes and subjects related to the Station), and also makes an excellent case that it is time for a new name for the outpost:

The international space station has flown for years with only an unofficial name, "Alpha." Now rarely used, and based on an obscure rationale, that name might at last have a worthy replacement, replete with honor and expressing what the 100-ton orbital outpost has truly exhibited: "Endurance."

With the space shuttle’s return to flight delayed another two months, the space station’s orbital isolation from large-scale repair and resupply will drag on even longer. Between the last shuttle departure in early December 2002 and the earliest possible return in mid-July, more than two and a half years have elapsed. It's traveled almost 400 million miles (640 million kilometers) in that period, and it has defied the doubters every mile of the way.

Jim has put together numerous links that elaborate on the history of the Space Station, with its many challenges and the piece is chock-full of links to problems encountered by the various crews and how they were dealt with. 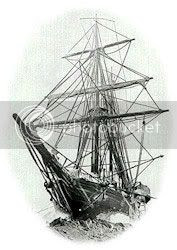 The name "Endurance" has a proud history. It was the name of the ship used in 1914 by Sir Ernest Shackleton and a crew of 27 as they set sail for the last unclaimed prize in the history of exploration: the first crossing on foot of the Antarctic continent. That was another adventure that was hardly free from mishaps and untoward events.

All in all Oberg documents the endurance of NASA's orbiting Space Station--and the resiliancy and flexibility of its crewmembers. I hope someone at NASA is listening, because the name "Alpha" unfortunately rather too aptly reflects the lack of imagination and vision of NASA's leadership; and the Station itself hardly deserves such a clunker of a name.

Even with all it's problems on-orbit, Oberg optimistically concludes:

Perhaps the greatest long-range value is simply in accustoming the world to the notion of people living in space on a regular basis, rather than in two-week episodes. The "larger goal" is the endurance itself, and that may prove in the end to be all the justification it ever needed.