He thought you could achieve peace through appeasement and worked hard with the villains of his time to do exactly that. It didn't work out too well for him--or the world. 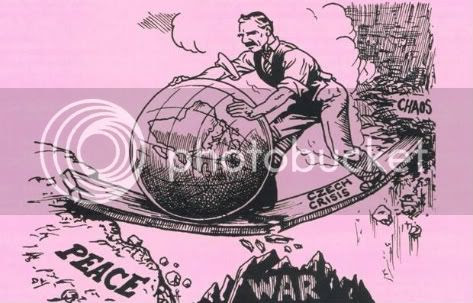 In "Fight, Flight and the Persistence of Evil", I wrote:

In the movie Serenity, Captain Mal Reynolds has witnessed the horrific nightmare that came from the lovely utopian dreams of the 'do-gooders' of his universe--who only wanted to eliminate human aggression so as to create a perfect society; they meant well, you know--and he decides it is time to take a moral stand against such naked evil: "Sure as I know anything, I know this - they will try again. Maybe on another world, maybe on this very ground swept clean. A year from now, ten? They'll swing back to the belief that they can make people... better. And I do not hold to that."

While the pacifist ('turning the other cheek' is another variant of running away, or Flight) may be considered saintly and their principles admired and emulated, if such a reaction to dealing with existential threats were biologically programmed into a species, that species would not survive for very long. Even in those species where the preferred response to danger is to almost always run away(because of their size or other limitations), they are still able to fight--quite viciously--if necessary. Take, for example, a typical rat whose usual behavior is to run away from any threat. When cornered, even this small animal will fight to the death if their survival is at stake.

All this is not to say that Flight strategies can not be extremely useful in many dangerous situations. They are. But, consider this very modern reality: there is nowhere to run to avoid WMD. And an important corollary to that is that there is no appeasing someone who is dedicated to an ideology that requires them to kill you.

Under such circumstances, there is no land that can be given up for peace--they will demand more and more and still come after you. There is no appeasement that will prevent them from 'wiping' you off the map. In other words, there is no way to coexist with the kind of evil that exists today.

This essentially means that the 50% of our population whose instinct, when confronted with the repugnant and unbelievable evil of Islamic fundamentalism and its direct and unambiguous threat to Western Civilization, is to run away, appease or convert; are incorrect in thinking that their peaceful response will be effective in preserving their own and their loved one's lives for any significant amount of time. On the contrary, it is more likely that it guarantees their eventual extinction--either physically or psychologically. The only option for them in the end--whether they like it or not-- is to turn and fight (like the cornered rat) or die. Interestingly, and unlike the survival instinct of the rat; many modern humans when faced with the evil that confronts us in the 21st century, have found comfort in psychological denial and in magical thinking about the threat.

Bruce Thornton has written about the magical thinking that seems to dominate foreign policy:

Worse, however, is the magical thinking that lies behind the mantra of “diplomacy.” This faith in talk is predicated on assumptions about human nature and state behavior difficult to validate by the historical record. It reflects a Western Enlightenment idea that force is an outmoded relic of our primitive past, to be replaced by rational discussion in which give-and-take dickering, negotiation, respect for the other side’s position and demands, and a mutual, sincere desire to adjudicate grievance and avoid conflict can resolve disagreements. The key assumption is that in the end all people are rational and want peace and comfort more than any other good.

It is well to remember what Winston Churchill once famously observed:
An appeaser is one who feeds a crocodile, hoping it will eat him last.

Remember Neville Chamberlain? The crocodiles ate him. A new generation of crocodiles are circling in the sewers of the world today looking for the Chamberlain of the 21st century.

UPDATE: Prior to WWII, Chamberlain himself flew to Germany to negotiate directly with Hitler in order to achieve "peace in our time". But, even he never managed all this:

I thought Barack Obama would be a poor and troublesome president. Did I think he would yuk it up with Hugo Chávez, smirk with Daniel Ortega about the Bay of Pigs, turn his wrath on a Central American democracy trying to follow its constitution, denounce President Bush abroad, bow to the king of Saudi Arabia, endorse a radical Middle Eastern view of how Israel came into being, knock Western countries that try to protect Muslim girls from unwanted shrouding, invite the Iranian regime to our Fourth of July parties, stay essentially mute in the face of counterrevolution in Iran, squeeze and panic Israel, cold-shoulder the Cuban democrats in order to warm to the Cuban dictatorship, scrap missile defense in Eastern Europe, and refuse to meet with the Dalai Lama — in addition to his attempts to have government eat great portions of American society? No, I did not. You?

Just call it the Obama Doctrine.

With just one announcement, the Obama administration undercut two loyal allies, rewarded Russian bullying, and diminished our ability to counter an emerging Iranian threat. If there were awards for self-defeating weakness, this move would deserve a Neville for Appeasement in a Perpetually Threatened Region.