FAVORITE WEAPONS OF THE TYRANT

Can you possibly imagine the cries of , "Fascism!" that would have greeted any attempt by the Bush Administration to use the NEA to make artists a cheerleader of the State, promoting the President Bush's policies? So how much have you heard about this?

On Thursday August 6th, I was invited by the National Endowment for the Arts to attend a conference call scheduled for Monday August 10th hosted by the NEA, the White House Office of Public Engagement, and United We Serve. The call would include “a group of artists, producers, promoters, organizers, influencers, marketers, taste-makers, leaders or just plain cool people to join together and work together to promote a more civically engaged America and celebrate how the arts can be used for a positive change!”

I learned after the conference call that there were approximately 75 people participating, including many well respected street-artists, filmmakers, art galleries, music venues, musicians and music producers, writers, poets, actors, independent media outlets, marketers, and various other professionals from the creative community....

Backed by the full weight of President Barack Obama’s call to service and the institutional weight of the NEA, the conference call was billed as an opportunity for those in the art community to inspire service in four key categories, and at the top of the list were “health care” and “energy and environment.” The service was to be attached to the President’s United We Serve campaign, a nationwide federal initiative to make service a way of life for all Americans....

We were encouraged to bring the same sense of enthusiasm to these “focus areas” as we had brought to Obama’s presidential campaign, and we were encouraged to create art and art initiatives that brought awareness to these issues. Throughout the conversation, we were reminded of our ability as artists and art professionals to “shape the lives” of those around us. The now famous Obama “Hope” poster, created by artist Shepard Fairey and promoted by many of those on the phone call, and will.i.am’s “Yes We Can” song and music video were presented as shining examples of our group’s clear role in the election.

Obama has a strong arts agenda, we were told, and has been very supportive of both using and supporting the arts in creative ways to talk about the issues facing the country. We were “selected for a reason,” they told us. We had played a key role in the election and now Obama was putting out the call of service to help create change. We knew “how to make a stink,” and were encouraged to do so.

Are you starting to hear the Twilight Zone theme music yet? The author of the above article--which you should read in full--ends with this:

And if you think that my fear regarding the arts becoming a tool of the state is still unfounded, I leave you with a few statements made by the NEA to the art community participants on the conference call. “This is just the beginning. This is the first telephone call of a brand new conversation. We are just now learning how to really bring this community together to speak with the government. What that looks like legally?…bare with us as we learn the language so that we can speak to each other safely… “

Now that President Postmodern is in the White House, what's to become of all those poor artists and poets who used to courageously speak "Truth to Power"?

I guess they will be more than happy to devolve into mindless tools of the powerful, yet benevolent, Obama Utopia.

But don't waste your time feeling sorry for all the repulsive second-handers who are voluntarily willing to suborn their "creativity" to pimping for Obama; instead, consider this unbelievably creepy Obama initiative; with teacher's manuals and everything to make sure that children take away the (politically) correct message:

PRESIDENT OBAMA TO DELIVER NATIONALLY BROADCAST ADDRESS TO STUDENTS ON SEPT. 8The President will deliver a speech about the importance of persisting and succeeding in school on Sept. 8, the first day of school for many children across America. The Department of Education is encouraging educators, students and parents to use this opportunity to help students get focused and begin the school year strong. The speech will be broadcast live on www.whitehouse.gov at 1 p.m. EDT. The Department of Education has also asked a group of U.S. Department of Education Teaching Ambassador Fellows to develop some suggested classroom activities around the speech to help engage students and stimulate discussion on the importance of education in their lives. The suggested classroom activities will be available on www.ed.gov.

Sounds fairly benign, doesn't it? Except that I can't possibly imagine Obama the Wonderful wasting an opportunity like this to campaign and suck in the next generation to be the mindless robots of the Utopia he is planning for America. Like the NEA confernce call a few days ago, this is likely to be yet another fascist Obama ploy to increase worship and adoration of Himself and his perfect agenda-- and to make little political tools out of little children.

Michelle Malkin has more on how this is likely to play out and the implications of this clever move on the part of the Obama Administration. I hate to keep quoting Joseph Stalin, but he definitely has Obama's number:

“Education is a weapon whose effects depend on who holds it in his hands and at whom it is aimed.”

Art and Education have always been the favorite weapons of every tyrant, large and small, as they consolidate their power; cut off any potential protests against them; and propagandize the glory of their wonderfulness.

I'm sure you have a pretty good idea who is holding the art and education weapons; and at whom both are going to be aimed, don't you?

Again, can you imagine the sputtering and incoherent outrage if President Bush had done something even remotely like this? Remember when the Dixie Chicks swooned in outrage when fellow citizens dared to boycott their anti-Bush music? But soon I'm sure we can count on them to release an upbeat song extolling the virtues of Obama's health reform legislation. Yeah! Speaking Truth to Power! Preparing the next generation to be obedient and docile tools of the fascist benevolent State!

The NEA and the Department of Education are being cynically manipulated to advance Obama's fascist political agenda. What next? Can we soon expect IRS officials to patriotically audit the tax profiles of those opposed to Obamanomics? Administration?

With all the fascist tendencies hope and change being promoted by Obama right now, is it any wonder that this sort of thing precipitates a deep suspicion bordering on outright paranoia? Just because you are paranoid doesn't mean that Obama and his merry band of fascists socialists aren't out to get you.... 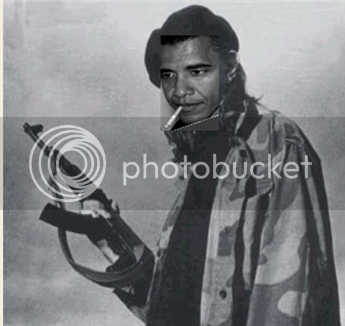 UPDATE: Ace wants to know if we'll be able to see Obama's speech to children in advance:

Ed at Hot Air catches the suggestion in the teachers' materials that students "write letters to themselves about how they can help the President."

I continue assuming this speech is all about achievement in school and suchlike other unobjectionable stuff. And I assume the line about "helping the President" is in reference to the president's call for academic excellence.

However... I've been wrong before. And while I assume it's just referring to academic excellence, I would not be surprised at all if he packed his address up with environmental nonsense and other lefty crap.

And if he does... well. He will have crossed yet another line that all other presidents have refrained from crossing.

Well, the audacity of fascism hope and all that.

UPDATE II: "Indoctrination never takes a vacation". Indeed. This previous post of mine on "The New Educational Indoctrination--Obama Style" is also worth a look. Let's not forget this part of Obama's recent history either:

Do you think it is just a coincidence that the Obama's connection with unrepentant terrorist and avowed leftist William Ayers had to do with an educational project in Chicago's schools? What do you imagine that project's real goals were, when the author of the grant that underwrote it was William Ayers, bomber, terrorist, and now university professor? Ayers was the one who wrote the grant in 1993, and hired Obama to administer it. This was Obama's only serious executive experience in his entire life, and it was a total disaster. But, we continue to observe the unrestrained incorporation of postmodern, leftist, PC, multicultural, and environmentalist ideas into the curriculum even as early as kindergarden.

UPDATE III: Don Surber says the backlash about all this is starting to make the messiah unhappy, so he is changing course: