LEFTISTS OF A FEATHER...

The Obama administration on Thursday cut all non-humanitarian aid to Honduras over the ouster of President Manuel Zelaya, making permanent a temporary suspension of U.S. aid imposed after he was deposed in June.

The State Department made the announcement as Secretary of State Hillary Rodham Clinton was meeting with Zelaya. Spokesman Ian Kelly did not say how much assistance would be cut but officials have said previously that more than $200 million is at stake. Kelly said it affected "a broad range of assistance to the government of Honduras."

"The Secretary of State has made the decision, consistent with U.S. legislation, recognizing the need for strong measures in light of the continued resistance to the adoption of the San Jose Accord by the de facto regime and continuing failure to restore democratic, constitutional rule to Honduras," Kelly said in a statement.

The San Jose accord, brokered by Costa Rican President Oscar Arias, aims to return Zelaya to power with limited authority until elections now set for November. But Zelaya's replacement, Roberto Micheletti, has refused to accept it, prompting Clinton's decision to cut aid

Of course, the article fails to mention that it was exactly democratic and constitutional actions that led to Zelaya's ouster in Honduras....

Don't you think it interesting that one of fthe first actions of the Obama administration was to reward the Palestinians with increased humanitarian aid for their ongoing violent jihad against a prominent US ally in the Middle East (at least Israel used to be an ally prior to the Obama Administration).

This is just more evidence that Obama is not only "palling around" with terrorists, but that, like the incompetent and hapless Jimmy Carter, Obama has never met a leftist tyrant or dictator he didn't like; and who he hasn't in his brief reign also encouraged and enabled. 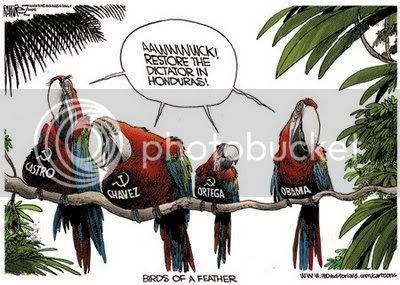