LACK OF POLITICAL WILL ? HOW ABOUT POLITICAL GRANDIOSITY?

...[W]hen President Obama addressed the General Assembly and Security Council he already knew that Iran was ignoring international standards, and its latest violations endangered international peace and security more than ever before. And yet he deliberately refused to put Iran on the agenda of the Council summit — the same Council that he claimed bore responsibility for responding to such threats.

President Obama knew that if the magnitude of the Iranian threat were revealed yesterday, the emptiness of his resolution would have been embarrassingly obvious and his cover blown. In public, at the highest levels of the U.N, he heralded generalities as significant. In private, he was petitioning lower levels of the U.N. to act on startling specifics of the Iranian threat.

Why did the president not present this same evidence to the Security Council, the body with “the authority and the responsibility to respond”? Why did he not challenge world leaders to deal with the same Iranian threat that he privately was pressing upon U.N. bureaucrats?

There is only one possible answer: President Obama does not have the political will to do what it takes to prevent an Iranian nuclear bomb.

Is it really a lack of political will? Or is it political grandiosity and malignant narcissism playing itself out on a world stage?

I do not happen to believe that Obama will do what is necessary to protect this country from the the Iranian threat. The only "evil" he has ever been able to internalize is that of the "social injustice" of capitalism and America, taught to him all through his life by his mother and father figures like Frank Marshall Davis and Jeremiah Wright.

Psychologically, he can't protect us, even if he wanted to. He is bound up in and obsessed with his own personal, unresolved conflicts and caught up in a destructive repetition compulsion; and having a Daddy who was interested in protecting little Barry's world is not something he can relate to.

All the world's his stage now--a stage he can use to act out those malignantly narcissistic defects manifested in his cold grandiosity and in his "selfless" devotion to pursuing what the left insists on calling "social justice"; but which in the cold light of reality always turns out to be the pursuit of power over others .

North Korea’s development and proliferation of ballistic missile technology pose a threat to the northeast Asian region and to international peace and security. The launch today of a Taepo-dong 2 missile was a clear violation of United Nations Security Council Resolution 1718, which expressly prohibits North Korea from conducting ballistic missile-related activities of any kind. With this provocative act, North Korea has ignored its international obligations, rejected unequivocal calls for restraint, and further isolated itself from the community of nations.
We will immediately consult with our allies in the region, including Japan and the Republic of Korea, and members of the U.N. Security Council to bring this matter before the Council. I urge North Korea to abide fully by the resolutions of the U.N. Security Council and to refrain from further provocative actions.

The man is all talk and aggressive inaction when it comes to national security. Other leaders have noticed and have begun to mock his childish agenda--even if our own media haven't:

“President Obama dreams of a world without weapons … but right in front of us two countries are doing the exact opposite.

“I support the extended hand of the Americans, but what good has proposals for dialogue brought the international community? More uranium enrichment and declarations by the leaders of Iran to wipe a UN member state off the map,” he continued, referring to Israel.

The sharp-tongued French leader even implied that Mr Obama’s resolution 1887 had used up valuable diplomatic energy.

“If we have courage to impose sanctions together it will lend viability to our commitment to reduce our own weapons and to making a world without nuke weapons,” he said.

He has enough political "will" to support the ranting Zelaya (yet another Chavez wannabe south of us) and, interestingly, always seems to come down on the side of those who dislike and even hate his own country. Obama needs to stop dreaming and wake up to the reality in front of him...but pointing out something like that to a person acting out his own personal psychopathology and grandiose fantasies on a world stage, while little children are singing praises to his wonderfulness and the left is reinforcing and enabling and excusing that gradiosity, would be therapeutically ineffective.

The American people have to find the political will to vote this disaster and his clowns in Congress out of office as soon as it is humanly possible.

UPDATE: The left is simply in awe of Obama, the World Chessmaster! (see comments about enabling grandiosity above) Yeah, right:

A sheriff who spends months convincing gangsters that his gun is unloaded may suffer from a credibility deficit when he tells them to come out with their hands up or else. But all this may yet succeed in prying an agreement from a regime which just demonstrated its willingness lie until it is caught. And when that agreement is to hand it will resolve everything, as we all know, even if you can’t believe a word on it.

But then it's all part of the "hope and change you can believe in" package! 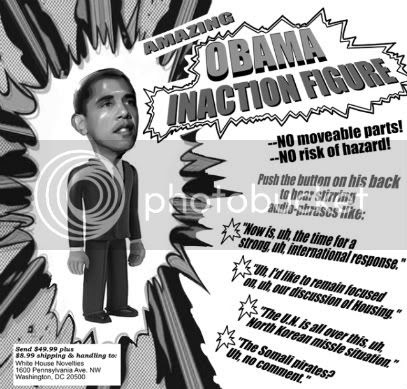