When Hamas leader Nizar Rayyan was assassinated in an IAF strike last week, his four wives and 11 of his children died with him. According to his surviving children, the death of the Rayyan family children was not an accident: Rayyan had trained his wives and children to die with him as "martyrs."

Surviving family members spoke to local Arab media and said that in the days before his death, Rayyan had repeatedly asked his children, "Who wants to die with me as a martyr?" The children would respond, "Yes, daddy, we all want to be with you alive or dead."

Rayyan's adult daughter, Wala, said even the younger children wished to die with their father. "If you had asked my four-year-old sister Aisha, who died in the attack, she would have told you that she preferred to die as a martyr," Wala told Ma'an news.

One of Rayyan's daughter-in-laws said she was offered the chance to die with the family. She stopped by the family's large home in Jabaliya and was asked by Rayyan if she wished to die with him, his wives and their children. She agreed to die, but later left the building, shortly before the IAF strike.

As it turned out, when Rayyan offered his daughter-in-law the "opportunity" to die he had already received a phone call from the IDF warning him to evacuate his house due to an impending airstrike.

The 11 children who died with Nizar Rayyan ranged in age from one year old to 16. Another son died years earlier when Rayyan sent him to carry out a suicide bombing in Gaza. Two Israelis were murdered in that attack.

Sick sick sick. And no amount of multiculti PC BS coming from the mouths of all the useful idiots of the left will convince me otherwise. 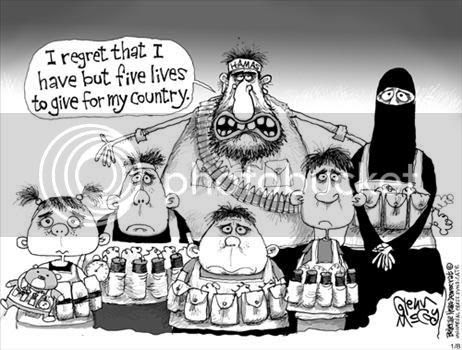