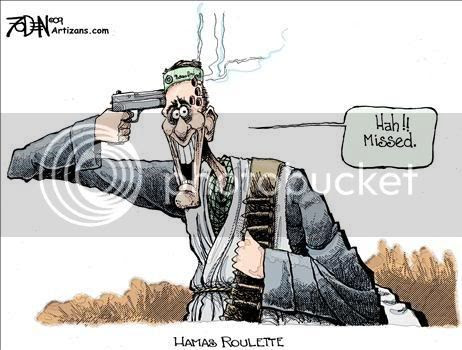 Or, as Siggy (who has an excellent essay up today on the collision of ideology, theology and Islam) commented recently, "Israel is only waiting for Hamas to declare 'victory' before it agrees to a ceasefire." You see, the Israelis know that it would hurt the self-esteem of the Palestinians and their Hamas leaders (bringing them great shame) if they had to actually admit how pathetic they are, so they are being kind and compassionate and allowing them to save face (as they did in Lebanon). But Hamas is dying to get another ceasefire (no pun intended) so that they can re-arm and re-group in order to start the same cycle of jihad against Israel all over again?

What is clear is that Hamas is now desperate for a lull in the fighting. But it is also eager to score some kind of a "military victory" before a cease-fire is reached.

Hamas is fighting for its survival and its leaders know that their collapse would constitute a severe blow not only to the movement, but also to its patrons in Teheran and Damascus.

Contrary to the dim bulbs of the left who weep and wail about the "disproportionality" of the Israeli response, the Israelis are acting appropriately to the threat directed against them. In an marvelous analysis at the Volokh Conspiracy, David Bernstein answers the question, "Are Palestinian Lives Worth as Much as Israeli Lives?" This is the question the morally bankrupt left likes to use to "prove" how evil Israel's actions are toward the Palestinians, and Bernstein demolishes it:

Let's say, for example, that the Israeli government's best guess is that military action will cost the lives of 1,000 Gazan civilians, but save the lives of 400 Israelis. (And let's assume arguendo that Hamas and not Israel is the "aggressor," so we can take off the table the argument that Israel doesn't have ANY right to engage in a military response.)

We have to start, I think, with a broader question. Are governments, in general, expected to act as if individuals who are outside their jurisdiction are "equally valuable" to their own citizens? The answer is clearly no. In practice, no government acts this way. Governments provide military protection, police protection, a justice system, food, shelter, medical care, etc., to their own citizens, especially poor citizens, and give little to the citizens of other countries, even when those citizens are far worse off on average. The most "Progressive" countries in the world, the Scandinavians, devote something like 2% of their budgets to their total foreign aid budgets to help billions of poor around the world, a figure obviously dwarfed by the money spent on helping their own small, well-to-do populations. Children are starving in Sudan and Bangladesh so an elderly Norwegian can enjoy a rejuvenating week at the spa paid for by his government! Aren't Sudanese and Bangladeshi lives worth more than the temporary comfort of a retired Norwegian?

Relatedly, no country in the world has open borders. The blessings of American citizenship, for example, are available only to a select few hundred million, and the rest of the world is treated as if they are "less valuable" by our government.

This goes to the basic heart of the implicit social contract between government and its citizens in a democratic society. The citizens pay taxes and obey government dictates, and in return the government fulfills its obligations to them. Protection from foreign enemies is among the most basic functions of government. Any government that fails to engage in such protection because it believes that noncombatants on the other side are equally valuable to its own noncombatants would be violating that social contract, as well as acting contrary to the actions of every government in human history.

Read it all. What is of even more interest to me as a psychiatrist, however, is that it is actually Hamas that seems to believe Israeli lives are worth more than Palestinian lives. They are willing to sacrifice untold numbers of Palestinians on the altar of their so-called "honor" (see previous posts on how highly they value their women and children) just to avoid acknowledging the reality of Israeli military and moral superiority--i.e., they "can't accept a new cease-fire without having proved to the Arab and Muslim masses that it was capable of making Israel pay a heavy price for its military offensive". They want to be able to capture just one Israeli soldier; kill just one group of Israeli civilians (hopefully children--when did Hamas ever need a "legitimate" reason to do so, one wonders?), in order to avoid shame. And, as I noted in Shame, the Arab Psyche and Islam:

When a culture determines that the avoidance of shame is necessary no matter what the cost, the result is a culture of fanaticism, bizarre behavior in the name of "honor"; and simultaneously the cultural oppression, subjugation, and humiliation of women and others perceived as "weak" (and therefore "shameful"). It also inevitably results in the projection of one's own unacceptable behavior and shameful feelings onto another individual or an outside group.

It also results in an endless war of the sort Hamas has decided to wage.

But Hamas can always count on the useful idiots of the left to enable and encourage them. Zombie notes in his post about the anti-Israel rally in San Francisco:

...at an earlier San Francisco Gaza protest on December 30, the Palestinian protesters (according to this post at the “At the Back of the Hill” blog) chanted the following slogans in Arabic:

“Itbach al Yahud” (slaughter the Jews)
“Falastin balad’na w’al Yahud qalab’na” (Palestine is our land and the Jews are our dogs)
“ba ruh, ba dam, nafdeek ya Falastin” (with our soul, with our blood, we will cleanse you oh Palestine),
“al mawt al Yahud” (death to the Jews),
“Khaybar Khaybar ya Yahud, jaish-Muhammad saya’ud” (Khaybar Khaybar oh Jews, the army of Muhammad will return).

At the Back of the Hill noted,

While the Arabs screamed their desire to exterminate Jews, the English-monolingualists simply stood there happily smiling their approbation.

How pathological do you have to be to celebrate a culture of psychopaths? Ask the political left, whose anti-semitism has become more open and more fully aligned with the beasts of Hamas in recent years.

The culture of Hamas is so severely pathological that they worship death and pursue it single-mindedly with unparalleled devotion. They weave the slogans above into the lullabies they sing to their children, thus corrupting the next generation and programming it with all the hate and death and desire to kill.

It is not enough for them to live in peace side by side with the Israelis who are routinely described as "apes and pigs"; it is not enough for them to even have their own state--their honor demands the death of all Jews and the elimination of the "Zionist Entity". Their self-esteem is so fragile they cannot exist while the Jews live and thrive. Like the mindless, but clever and lethal "Terminator" of Hollywood fame, they will continue to follow their fundamental programming until they are utterly dismembered and totally crushed; and they will take down all of civilization with them if they have to.
Posted by Dr. Sanity at 12:25 PM