In dealing with the war, he shows his keen grasp of the danger America faces by endorsing a path that will result in the release of the medieval dinosaurs kept in check there--a perfect example of life imitating art: 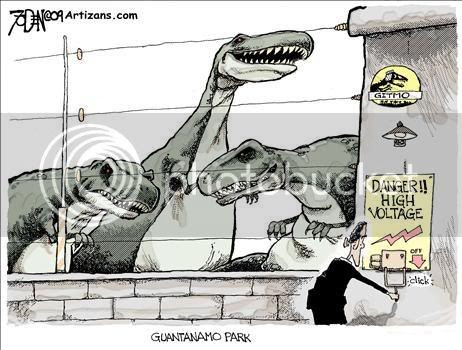 I don't know about you, but I certainly feel much safer. And I'm convinced that the Obamessiah's soaring rhetoric is what will keep those evil-doers in Al Qaeda at bay...why they are simply quaking in their collective sandals by the utterings of the One!

And, in domestic policy the One demostrated by example--i.e., nominating Mr. Geithner-- the kind of personal responsibility and patriotism he and Joe Biden championed during the campaign:

I don't know about you, but I certainly feel much more responsible about paying my taxes, not to mention feeling much more patriotic; and when Geithner gets confirmed, I have every expectation that he will swoop down and rescue the economy from all the cheats and opportunists who have deliberately damaged it.

As for Obama, well what do expect of a politician who basically did nothing of any significance and had zero executive experience prior to running for President? He's all ideology and no sense. And if you have any doubts about what his true agenda is, you might take a look at the article Power Line links to which discusses the scope of our new President's ambition and the seriousness of his purpose.

Just remember: he hasn't really done anything yet; he's too busy undoing--and that doesn't require anything special--just the usual leftist denial and displacement.

Things are bound to get even more entertaining, not to mention more dangerous, on both the domestic and the war fronts, as his ambition to transform America into a bright and shiny postmodern Marxist utopia unfolds.

The Anchoress has an excellent roundup of all the contradictory discourses the have emerged in the opening days of the Obamessiah's reign.

UPDATE: "And on the 5th Day, subpoenas were served to Obama's senior staff":

A veritable "who's who" of Obama staffers, surrogates and affiliates were among those served with subpoenas. Put simply, within one week of President Barack Obama's administration taking office, it is already under significant legal scrutiny that will -- at a minimum -- take precious time away from dealing with the country's monumental economic and foreign policy challenges.

And, once again, the mainstream media is AWOL, unwilling to report on this very newsworthy story.

Among those served with subpoenas were:

David Axelrod, Obama's "Karl Rove" and the biggest surprise on the list. Obama's team issued a report in December that said his staff had no "inappropriate contact" with Blago, so the inclusion of Axelrod is a bit of a shock.

Valerie Jarrett, Blago's "Senate Candidate 1", a real estate management executive and political hack of the first order. Her ties to failed and fraudulent real estate deals in Chicago were the subject of numerous investigations and should have instantly disqualified her for any public office.

Rahm Emanuel was already deeply involved in the case with some reports describing as many as 21 conversations with Blago's office during the period in question.

Let's hear it for transparency, responsibility and patriotism!
Posted by Dr. Sanity at 7:38 AM