IMAGINE! A Few Thoughts on the Stimulus Debt Package 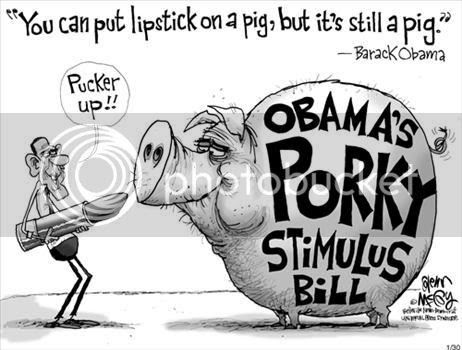 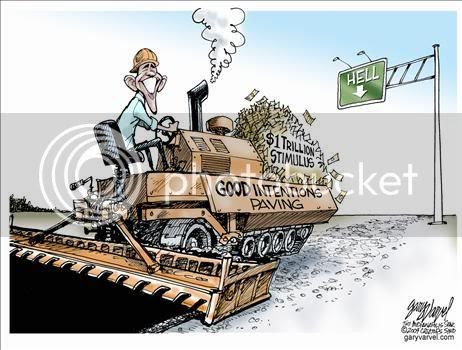 I want you to consider two items.

Jan. 29 (Bloomberg) — President Barack Obama fed a swelling populist revolt against Wall Street bonuses, calling it “shameful” that banks doled out $18.4 billion as taxpayers bail out companies and the U.S. remains mired in a recession.

The bonuses are “the height of irresponsibility,” Obama said today before meeting Treasury Secretary Timothy Geithner and Vice President Joe Biden at the White House. Firms need to “show some restraint and show some discipline,” Obama said.

The president joined politicians such as Senator Christopher Dodd, who today called for using “every possible legal means to get the money back.”

Yes, if there's anyone who knows how to extract money from C.E.O.s — it's Christopher Dodd.

Mickey Kaus reportsthat according to a new Obama executive order: "when a government service contract expires—and there's a new contract to perform the same services at the same location—the new contractor has to keep the old workers." Because, according to the White House:

Mickey asks the key, though clearly irrelevant, question: "But what if the contract got switched because the previous work force, you know, sucked?"

The social engineers of the left, motivated as they are by their creative utopian aspirations--expressed by the desire to impose (forcibly, if necessary) universal peace, social justice and brotherhood upon humanity--are completely oblivious to the malignant side of their own natures. Both they and the capitalist entrepreneurs of the right who they despise so vehemently are both driven by the darker human emotions: envy, greed and a need to dominate others.

However, there remains an extremely crucial difference between them:

The do-gooder leftist in all the various ideological incarnations--the antiwar crowd, the environmental crowd, the communists, socialists, and assorted collectivists--offers the rationale that he does what he does for the "common good" and for "social justice", "peace" and "brotherhood". His high-minded, self-righteous rhetoric justifies (to him anyway) imposing his will and beliefs on others for their own good; and he will not hesitate to use whatever coercive capablity he has at hand to get others to do what he wants and what he says.

The capitalist, on the other hand, is overtly out to pursue his own selfish profit, and understands he must use persuasion. That is, he must convince people that his ideas and the products of his mind are better than all the rest so that they will be willing to part with their hard-earned money to possess them. His desire for power over others is manifested in an indirect manner because people must wnat what he has to offer and believe that they will benefit from an interaction with him.

There is no parallel social limitations on the behavior of the leftist. This tyrant wannabe does not feel the need to convince others of the veracity or even the effectiveness of his ideas (and, because they ignore reality, they are totally and completely ineffective and ultimately destructive); nor does he accept defeat when others are not interested or resist their implementation. He knows in his heart what is best for everyone, and he will use coercion if necessary. He will not allow options; nor will he permit others do do what they think is right for themselves. Their feelings or concerns are a matter of complete indifference to him. Only his own matter.

The leftist's desire for power is direct and absolute; and this is a direct consequence of his utopian ideology.

The Democrats and the left, through the election of Barack Obama to the Presidency, are about to get the ultimate reward for being out of touch with reality--power. Just imagine the economic destruction and chaos they will be able to unleash then!

It's beginning to be very easy to imagine, isn't it?

Oh, and for the record, Mr. President and and all you shameless members of Congress: If you permitted these losers to fail, i.e. take the consequences for their irresponsible, incompetent and stupid business decisions, and not reward them handsomely financially for such behavior, you might actually stand a better chance of improving the economy. Instead, you are facilitating a generation of looters in the business world, ready, willing, and able to work with the looters in government.

UPDATE: Clearly, there's only one thing to do...demand a BAILOUT!!!! LOL (p.s., I agree with The Anchoress: change is not a terrible thing at all...except when it's in the hands of 'progressive' do-gooder/idiots. Then, watch out.)
Posted by Dr. Sanity at 9:23 AM