A NOT SO INEXPLICABLE ANGER

Glenn Reynolds notes that a "prophecy" uttered by Jonah Goldberg is already coming true. From an email he quotes:

Watched the NH returns with some friends last night, and something quite unexpected happened when the AP called it for Clinton -- inexplicable ANGER. I was surrounded by people in their early 30's, registered Democrats, receptive to the Clintons in the 90's, and I swear I thought someone was going to throw their wine glass at the tube during her 'victory' speech.

And that's just one primary! All is proceeding as Jonah has foreseen.

Actually, the anger that many on the left are currently directing at the Clintons post-New Hampshire, and that we on the right are observing with mixed astonishemnt and amusement--is in many ways, quite remarkable. Those of us from the conservative side of things have had a long tradition of dislike of the Clintons--husband and wife. Sometimes this dislike has become so intense and overpowering that it has clouded--or at least impeded rational judgments about either.

So it is particularly surprising to see the people who for years adored the happy couple; sanctified and righteously defended Bill, and beatified Hillary while holding her up as a model for all women, suddenly--and with so very little alteration in the essential behavior that either bill or Hill have displayed for the last 15 years--screaming with outrage at their former pets.

No wonder Hillary cried in public. She has been betrayed by the Democrats and the left in the same casual way her fickle husband has been betraying her throughout their marriage.

In a post called "Denial,Repression, Lying and Forgetfulness" I wrote:

Denial, which is an immature defense is defined as an attempt to reject unacceptable feelings, needs, thoughts, wishes--or even a painful external reality that alters the perception of ourselves. This psychological defense mechanism protects us temporarily from:
-Knowledge (things we don’t want to know)
-Insight or awareness that threatens our self-esteem; or our mental or physical health; or our security (things we don't want to think about)
-Unacceptable feelings (things we don’t want to feel)

One type of denial is Repression , a neurotic defense characterized by a seemingly inexplicable naivete, memory lapse, or lack of awareness. Repression is often dismissed as an artifact of diminished attention by cognitive psychologists, but I find that it almost always reflects a rather creative method to resolve some inner conflict for the person who uses it. With repression, affect is out in the open, but the associated idea is out of the mind and unavailable to consider. Someone who has repressed some knowledge may be genuinely astonished that anyone would consider them to have deliberately ignored the issue.

The "forgetting of repression is different from ordinary forgetting in that there is often some sort of parallel symbolic behavior that goes along with it.

Most often repression is associated with histrionic traits. A typical example might be the doting and dutiful wife who remains blissfully unaware of the husband's constant philandering--although the evidence is obvious to everyone else; and she may not understand why she feels anger at her spouse. She may defend him passionately from his accusers, but the anger will find a way to express itself in various ways within their relationship....

Thus, we might conclude that Hillary's surprise in discovering that Bill was being paid by Dubai and the U.A. E., even as she was denouncing the port deal is an example of:

...[S]uffice it to say that neurotic defenses may be used by all sorts of intelligent people....

The left and the Democrats are now equally astounded to discover that the Clintons are the Clintons! And that they would use the usual Clinton tactics against them!

Just as Hillary had a neurotic and "forgetful" moment regarding the antics of her husband; what we are witnessing is a supremely neurotic moment on the part of the left, who willy-nilly have jumped the Clinton ship and climbed aboard the Obama "vessel of hope". They are astounded that the antics of the Clintons (which for years they have rationalized and excused) are being used against them. Their idealization the Clintons had worn thin and, just in the nick of time, along comes a younger, prettier face that can help them shore up those tired, old "progressive" ideas, and delude them into believing they actually are supporting something fresh and innovative.

I hate to tell them, but Obama is just another socialist hack. For sure, he's fresh and young and articulate. But his ideas are no fresher than Hillary's and quite a bit more rigid and uncompromising. Hillary and Bill never believed in anything but themselves. Obama comes across as selfless as Mother Theresa, promising to lead us to his utopian wonderland.

What we are witnessing is the neurosis and fickleness of the political left, who just a short time ago adored the Clintons and could bear nothing bad be said about their legacy in the White House.

Like the prototypically unfaithful spouse, they blithely abandon the imperfect, aging and increasingly more obviously flawed partner to take up with a person who can give them the illusion that their old ideas and their stagnant political party seem young again.

And, when confronted with the unpleasant reality of their traitorous and shallow thoughts, they react with surprising anger toward the former object of their love, who now stands squarely in the way of being able to attain the new, and more perfect, ideal object.

I wish them luck with their audaciously new-and-improved delusion hope. 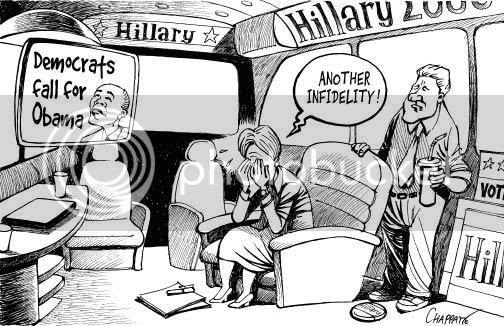