HOW SMART ARE THE DEMOCRATS ? NOT VERY

I have a really busy morning so no blogging until later.

In the meantime consider this cartoon from Chuck Asay, which summarizes the intellectual and moral bankruptcy of the Democrat party position--and all their Presidential candidates-- on some of the most significant issues of our time: 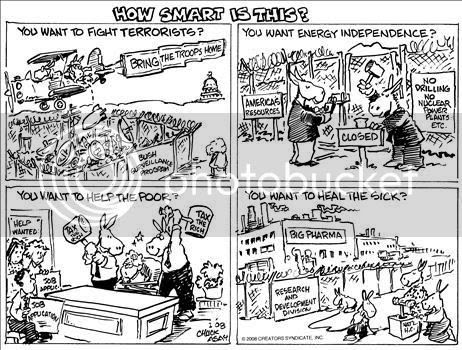 But gee, they mean well...just because their self-righteous and emotional posturing always seems to result in exactly the opposite outcome from what they say they intended--i.e., enabling our enemies, increasing our energy dependence, maintaining the poor and sick as perpetual victims of the evil capitalists--doesn't mean they aren't really swell guys and gals. Or, does it?

Either most of today's Democrats are incredibly stupid and genuinely clueless; or, they are malevolent beyond measure in their heart of hearts. Maybe both.

Feel free to debate these and any other hypotheses in the comments.
Posted by Dr. Sanity at 6:51 AM