The Satellite of Love, Blogsphere Edition

I was a big fan of Mystery Science Theater 3000 (better known as MST3K) and have missed it greatly since it went off the air sometime back. Thus, when I read these words from Mary at Exit Zero(formerly what they are saying), I found myself in the midst of an epiphany:

In any case, reading about ‘The The Eye Creatures’ makes me nostalgic for the real cult classic, MST3K. I really miss that show; about the crappy opening credits for 'The the..' and the costumes in which the zippers and black sneakers were clearly visible, Crow, Mike Nelson and Tom Servo agreed – the producers ‘just didn’t care’.

I miss MST3K, but I think the concept of heckling junk entertainment (and turning hours of snark into a decent show) inspired us all.

What are fisking and blogs but an updated version of the Satellite of Love? Trapped with no escape from cheesy news, the worst ever made – we’ve got lemons, we make lemonade.

CNN and the Times make 'Eye Creatures' look like high art. They just don’t care. Too bad it's not just a show. (emphasis mine)

Wow! What an incredible insight! This is exactly what inspired me to begin blogging in the first place. I will treasure the image of bloggers, their outlines stark black against the screen, making ascerbic and witty comments about the cheesy news. Thanks, Mary! 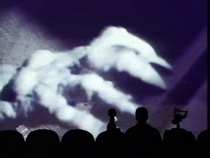 Crow, Mike Nelson and Tom Servo watching a cheesy movie on the satellite of love.