TWO THINGS THAT DON'T SURPRISE ME IN THE LEAST

The first one is funny, sort of--in the same way that Franken himself is not very funny:

Democratic Senate candidate Al Franken’s personal corporation didn’t file corporate income tax returns in California from 2003 to 2007. He now owes more than $4,000 in back taxes, penalties and fees. Franken campaign spokeswoman Jess McIntosh said if Franken’s business owes the money it will pay up, which is nice, given that it is illegal to not file or pay corporate taxes.

Ah yes. Another candidate for change--YOU pay taxes and HE will enthusiastically collect them! YOU do as he says, not as HE does. Franken has made a career out of mocking others. He reminds me of Nelson in The Simpson's, who goes around saying, "HA, HA" at everything and everyone else's expense; but doesn't particularly like it and becomes bullyish when the tables are turned. HA, HA, Al.

The second one is even more predictable:

During an interview on WABC radio Sunday, top Hamas political adviser Ahmed Yousef said the terrorist group supports Obama’s foreign policy vision.
“We don’t mind–actually we like Mr. Obama. We hope he will (win) the election and I do believe he is like John Kennedy, great man with great principle, and he has a vision to change America to make it in a position to lead the world community but not with domination and arrogance,” Yousef said in response to a question about the group’s willingness to meet with either of the Democratic presidential candidates.

For the record, the Hamas foreign policy vision, includes the following highlights qupted directly from their Charter:

Perhaps Senator Obama would care to address these items, particularly #3 --before he makes a plan to engage in any 'vain endeavors'--like diplomacy-- with the group, like fellow Democrat and ex-President Carter? 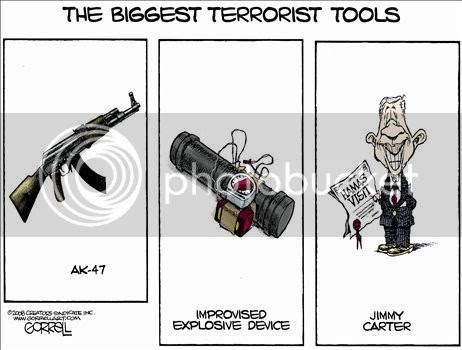 Cartoons by Bob Gorrell
Posted by Dr. Sanity at 7:26 AM