Where in the world is James Earl Carter?

The ex-President can usually be found cuddling up to the charismatic tyrants of the world--all in the name of peace and tolerance. This week, the deluded ex-President will be meeting with Hamas , the Palestinian organization that the U.S. government considers one of the leading terrorist threats in the world. Hamas leader Khaled Meshal, the exiled head of the terror group is in Syria and is already trumpeting the meeting with Carter on April 18 as a psychological coup against Israel--one that gives the terror leader and his organization some sort of international legitimacy.

This ongoing debacle perpetrated by Carter not only won him a Nobel Prize but also brought international honor to one of his favorite despots, the unrepentant terrorist who later destroyed any hope that the Palestinian people could achieve anything but martyrdom for the cause of Islamic jihad.

Having received the ultimate world award, it is too much to hope that Carter would ever be inclined to grow up and face reality about the company he keeps (this, btw, appears to be a serious malady on the political left). So, as long as he's breathing, we can all expect Jimmy to cozy up to any and all dysfunctional Palestinian leaders as well as every other totalitarian tyrant running around in this portion of the universe.

Indeed, Carter has shown a remarkable egalitarianism with all other dictators, murderers and thugs who happen to rule a variety of countries; he particularly likes those who cloak their psychopathy in the guise of pseudo-democracy.... 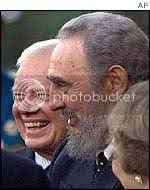 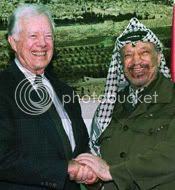 But Carter has always been especially concerned about making sure that the Palestinians retain their standing as world-class victims of the Jewish state and, of course, the US. Just before the Hamas victory in the Palestinian elections in 2006, Jimmy was overwrought at the possibility that the U.S. and Israel might 'punish' the Palestinians for electing a terrorist group that has in its charter the goal of eliminating Israel. Holding them accountable would just be wrong:

During this time of fluidity in the formation of the new government, it is important that Israel and the United States play positive roles. Any tacit or formal collusion between the two powers to disrupt the process by punishing the Palestinian people could be counterproductive and have devastating consequences.

Interestingly, the most 'devastating consequences' have come about anyway because Hamas is more concerned with promoting the destruction of Israel than it is in governing a Palestinian state. People like Khaled Mashal, with whom Carter is meeting this week, is the Hamas leader in exile who makes sure the destruction of Israel remains the key priority for Hamas--no matter how much the Palestinians suffer. Of course, that's why Carter is meeting him in Syria. He has no particular interest in sharing the misery he deliberately inflicts on the Palestinians in order to obtain world sympathy for Hamas' terrorist actions.

And, of course, he doesn't seem capable of understanding the consequences of his own appeasement and enabling of terror and despotism worldwide.

Someone once said that Jimmy Carter was actually the first female president of the U.S. (I think it was Gagdad Bob at One Cosmos); and I must say that this assertion is an insult to bimbos everywhere. Carter reminds me of the pathetic mother in the movie Mean Girls who wants to be loved and accepted by her daughter's clique (and completely identifies with them--meanness and all); so much so, that she is eager to enthusiastically support their antisocial acting-out behavior and endure the girls' contempt as well.

Carter is perhaps a wannabee despot herself himself, who admires and seeks the approval of practically every dictator in the world (it is possible that using the word "practically" is being overly cautious). I'm sure he lusts in his heart for the kind of brutish manliness such thugs radiate, but he only manages to come across as a weak and insecure person who stands for nothing.

Of course, the Palestinians are not simply mean adolescent girls who will eventually grow up; nor is Carter merely an ineffective and irresponsible mother who probably missed the chance to ever fully mature. The former is an unrepentant terrorist organization that remains devoted to its stated goals of destroying Israel and the Jews; and the latter is a former US president and first-class enabler of tyranny.

Until the Palestinians have to deal with the consequences of their behavior, they will not mature as a people. Sending them to their room own country and giving them a chance to ponder some reality was a good idea only if they now must also take responsibility for their behavior.

Carter's--and the entire left's--obsession with the eternal victimhood cult of the Palestininas has been the single biggest psychological impediment toward peace in that region. Why should the Palestinians ever change? Or mature? Or deal honestly with Israel? They have every reason to believe that the Carters of the world will always let them off the hook--and bail them out--no matter what they do or how badly they behave.

After Carter's trip and his 'seal of approval' bestowed, expect Hamas' terrorist behavior to escalate dramatically.

UPDATE II: Siggy has more inflammatory comments about the ex-Prez
Posted by Dr. Sanity at 6:53 AM