It's like any dysfunctional, lopsided relationship, and the spiral of groveling has already begun:

The alternative to the “escalation trap” is the spiral of groveling. If the leadership in Teheran believe that the Obama administration is incapable of doing anything except offering more carrots then they will continue to behave as if a stick didn’t exist. Without a downside to their actions, the Ayatollahs will logically be motivated to hold out for more. And more. And more. The Times Online notes that Iran has already publicly rejected Obama’s overture. The administration’s response to the rebuff has so far been to offer more overtures....

Iran has stated its conditions. Lift the sanctions. Make nice. Stop supporting Israel. By publicly offering to speak to Teheran without knowing what that regime’s response would be, President Obama gave it a chance to throw pie in his face, which it did; and it implicitly left the Ayatollah’s with the power to determine when its suitor in the White House would be sufficiently shaved, barbered and bathed to be worthy of speech. The President will have his dialogue in due time. But only after he has paid the price.

Meanwhile, Hamas is only a step away from an invite to the oval office. You've got to wonder which of the players in this sick relationship will be on their knees in the characteristic Lewinski pose. 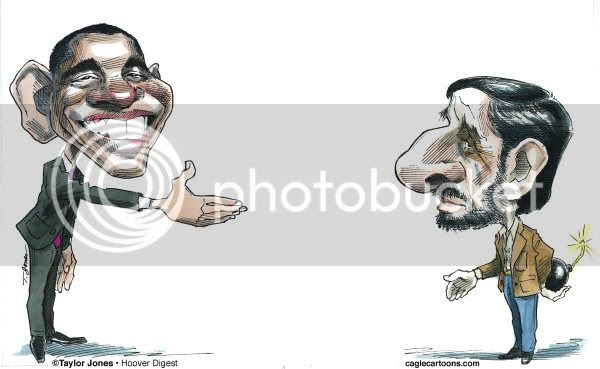 And, Scott at Power Line explains why he (and I) are depressed:

I feel utterly powerless to do anything about the fellow in the Oval Office who combines infantile leftism and adolescent grandiosity in roughly equal measures. It seems to me that every day he is responsible for assaults on the freedom and well being of the American people. I can't keep up and I can't stand to pay attention.

His aim seems to be to reduce us to government dependents. His inattention to rehabilitation of the financial system in lieu of vastly expanding the size and scope of the government is a dead giveaway, as is his lack of concern over the vast destruction of wealth his policies are working (and will continue to work).

Perhaps most depressing to me is the manifestation of his adolescent grandiosity in his stewardship of foreign policy and national security. He doesn't understand that the government of Iran is intent on acquiring nuclear weapons it can put to evil purposes. He thinks he can sweet-talk them out of achieving this objective.

Infantile leftism and adolescent grandiosity pretty much sum it up.
Posted by Dr. Sanity at 5:44 AM