The second person plural used to come naturally to all Americans. G.I.s in World War II were "our boys" (the second word now politically incorrect and also inaccurate), whether you were a Republican or a Democrat, from the North or the South, black or white. But the Vietnam War got liberals out of that habit. U.S. troops were "the military." They were sent into Lebanon and Grenada not by "the president," but by "the Reagan administration." (Did anyone say that troops were ordered to Normandy or Iwo Jima by "the Roosevelt administration"?) The Gulf War in 1991 was regarded by most Democrats and liberals as "their war."

The success of the Gulf War and the election of a Democratic president the next year got Democrats back into the habit of thinking of the government and the military as "ours." They reveled, especially during the Clinton impeachment proceedings, in portraying themselves as the champions of "our troops." They howled in anger, I think justifiably, when House Minority Leader Dick Armey, looking over to the Democratic side of the aisle, referred to Bill Clinton as "your president."

Today, Democrats are pretty much back to the third person plural. Yes, they still talk of "our troops" from time to time, but usually only to call for them to be "redeployed" from a mission that has been more successful than not, but has not been completed. They seldom mention any soldier's heroism unless they can persuade him to run for office on the Democratic ticket. They talk, instead, about George Bush's war, even though most Democratic senators and nearly half of House Democrats voted to authorize it and -- remember? -- said that they believed Saddam Hussein had weapons of mass destruction.

And most Democrats are willing, even eager to take unprecedented stands that will retard the fight against terrorism. More than four-fifths of House Democrats voted against the military tribunals bill this week, though military tribunals have always been used to try unlawful combatants, and the bill gave those charged more protections than in the past.

America, they appear to feel, does not include them unless they happen to be in power. This can be seen clearly in the rhetoric used, as Barone notes (read it all), which carefully avoids the first person plural--the "us" or "we" or "our".

There are very real issues--both nationally and internationally-- that require the goodwill and common sense efforts of Americans--both Democrats and Republicans. Disagreements are expected and spirited debate has always been an important part of our heritage. Republicans are certainly no saints; but the Democrat's insistence that the Iraq war is some sort of "distraction" from the GWOT (which doesn't really exist in the first place because terrorism has been used as a fear tactic by the Bush Administration); the way they prance and posture over issues like the Guantanamo detainees or the need to obtain intelligence on our enemies; and their constant need to exploit every negative event in this war--all of this is simple opportunism and maliciousness demonstrating neither goodwill nor common sense.

Even in the Foley affair--which should make any American shudder in disgust--the relentless attempts to portray the scandal as a uniquely Republican perversion is breathtaking. Their joy in this "October surprise" is illuminating of their own character.

Do they perhaps forget a recent president's shameful sexual behavior and pathological lying that led to national disgrace? Have the Democrats forgotten Barney Frank's censure not too long ago? Have they forgotten a certain Democratic governor who recently resigned because his sexual inappropriateness interfered with performance of his job? It goes without saying that they have deeply buried in the recesses of their mind the knowledge that one of their party's leaders deliberately and with conscious intent some years back let a young woman drown to save his own ass.

Perversion is part of the human condition and not exclusive to one political party or the other. But they would have you believe this is not the case and that they represent moral purity and righteousness. How typical.

But I will tell you what is truly perverse in my estimation. It is the continual betrayal of the "we" that characterizes today's Democratic Party and its increasingly amoral leftist base. It is symptomatic of a serious illness of the soul that both have become so anti-American; so irrational; and so distorted by hatred that they are willing to sacrifice America--us--and all we stand for to the savages we are fighting.

And all because they can't get over the fact that they have been losing elections for over a decade now. Well, I think they will be continuing to lose them. It may be the only wake-up call they are capable of understanding.

I predict that this unconscionable irresponsibility will not help the Democrats very much in the elections this year; in fact, it may even hurt them much to their shock and surprise. But whether it does or not, their current behavior and rhetoric will haunt our country for generations to come.

I always liked the motto 'e pluribus unum'. But it sure ain't the motto of the left and the Democrats today. They prefer 'e pluribus solus Democratum'

I'm not saying that Republicans are at all better, and of course elections breed some policy timidity. But the infuriating thing about the Democrats is that, just a decade ago, they knew how to empathize with voters' economic insecurities without collapsing into irresponsibility; they combined attractively progressive social policies with sensible pro-market fiscal responsibility. Now many in the party have lost interest in this necessary balance. If the Democrats win a measure of power next month, it's hard to see what they will do with it.

As I have said before, The Democrats have become the party of nothing and more nothing. Even some of their own are beginning to understand this basic truth.

UPDATE II: "Bastards - all of them" - so says SC&A in a must-read post. He seems to be in a very bad mood which bodes ill for both Democrats and Republicans. And did I mention that he doesn't like hypocrisy? 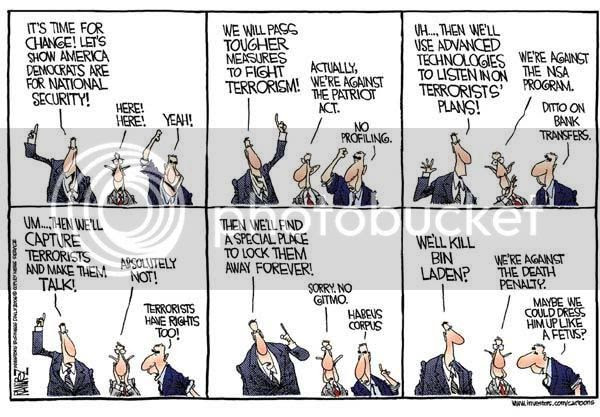