The Democrats don't have a plan and aren't ideologically capable of developing a plan; therefore, all they can do is attack anyone who is making an effort to solve the problem. Indeed, the official White House position seems to be that is that there is no problem that hope cannot solve--especially if we delay until after November when hopeandchange and Obama's hot air will get the economic balloon off the ground. 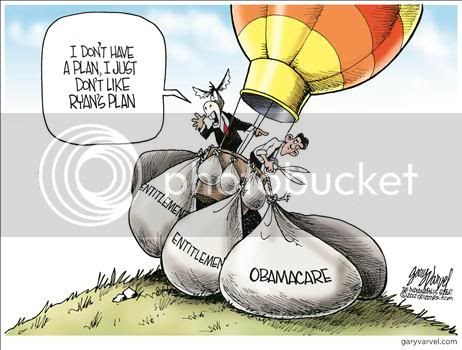 If you remember from the last post, this is an example of the logical fallacy that goes by the names "ad hominum" attack.

White House Press Secretary Jay Carney didn't pull any punches in his attack on Paul Ryan's budget, as he declared that supporters of the budget -- and by extension, Ryan himself -- are "aggressively and deliberately ignorant" about the need for green energy and other programs slated for cuts.

"You have to be aggressively and deliberately ignorant of the world economy not to know and understand that clean energy technologies are going to play a huge role in the 21st century," Carney said after decrying the clean energy spending cuts in Ryan's plan. "You have to have severely diminished capacity to understand what drives economic growth in industrialized countries in this century if you do not understand that education is the key that unlocks the door to prosperity," he added.

Carney concluded that "the budget proposed by Chairman Ryan and supported overwhelmingly already by Republicans suggests that those problems" -- aggressive ignorance and diminished comprehension -- "exist in the minds of the supporters of that plan."

It's a toss-up whether Carney (who is sounding more and more like Bagdad Bob every day when it comes to issues of the economy) and his bosses at the White House are in full-fledged psychological denial, or if they fit the parameters of their own psychological projection. I don't quote Ann Coulter often, but she was dead on when she opined, "You can always tell what liberals are up to by what they accuse you of."

Either way, the Democrats and their leftist base appear not to be in the least bit interested in the FACT that the US debt is rising at record rates under their Messiah. They appear to be unfazed by the FACT that the Democratic Senate has not passed a budget in years. They appear to be remarkably and reflexly intolerant that one of their number, who happens to be a Republican has been trying to start a national dialog on reducing the deficit and fixing entitlements for several years now.

Gee, I wonder why?

As I have said before, at the center of all psychological denial is a hidden agenda. That agenda is usually not completely conscious--meaning that the denier has not thought through the issues surrounding his denial; and may not even be aware of what his motivation is in asserting something is true when it isn't; or false when it isn't. The entire act of denial about this economy was initiated to justify continuing to spend wildly the taxpayers' money and not have to do anything to slow down that spending because they "hoped" and "wished" that things would get better by doning nothing but spending even more.

Many of our lawmakers (on both sides of the aisle) made what they thought was a temporary psychological bargain to pretend that everything was OK. But that temporary bargain has evolved into a binding contract for some and no amount of evidence will make them alter the fantasy reality they have created.

Their denial is reflexive and completely willful at this point. They simply refuse to accept reality because the consequences are too excruciatingly painful to contemplate(both with regard to their image of themselves and to the country they were elected to preserve and protect).

Since they have no facts to back up their present stance, they must resort to rhetorical ploys and logical fallacies to make their opposition look like they "hate the poor"; or are "racist" etc. etc. blah blah blah.

If we, the taxpayers and voters of this country allow them to keep spending as if their is no tomorrow; there will be no tomorrow for the US economy. Personally, I have nothing against hope; but when hope is the only economic policy driving the engine of state.... 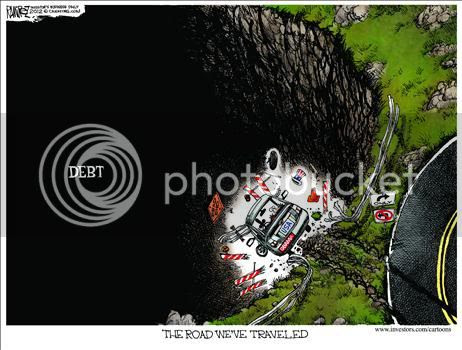