When I was a kid, vegetables, but particularly broccoli and peas, were the symbol of parental oppression. I hated vegetables with a passion and used to surrepticiously transfer small pieces of them into my pockets during dinner. Sometimes my Grandfather helped me out, being someone who also hated the little green things that my mother always seemed to cook in large quantities.

So I could really relate to Justice Scalia's questioning at the Supreme Court the other day during the session on the Obamacare individual mandate:

Can the federal government make you buy broccoli?

What a horrible thought! That the Federal Government could have the power to make you buy brocolli! Even though the Solicitor General assured the Justice that such an outrage could never come to pass, why should we believe him? For all we know, such an order might yet be discovered in the 2000+ page bill rammed through by Democrats.

Nancy "You have to pass it to find out what's in it" Pelosi is exactly the sort of person who would force me, even as an adult, to eat my broccoli.

Since those days of my youth many years ago, I have taken a more nuanced attitude toward broccoli and vegetables in general. I still don't like them much, but do attempt to make them part of my diet occasionally.

Nevertheless, let me say this: if do-gooder scumbags like Pelosi and Reid win the day and Obamacare passes Supreme Court muster, then I will put aside my childish dislike of broccoli and fight as a fully grown, adult person who happens to value individual freedom passionately, and go on strike.

The days when I had little choice but to allow someone tell me what is good for me and then force me to do what they say are long past. 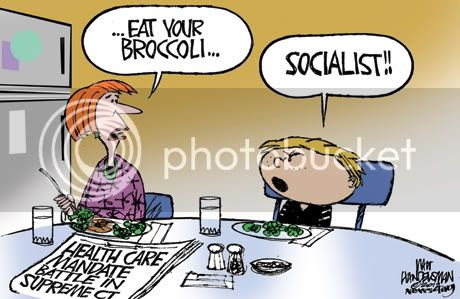 [Political cartoons by Walt Handelsman]
Posted by Dr. Sanity at 9:54 AM