MAYBE OBAMA'S PAST WITH AYERS WILL BE REVISITED AFTER ALL?

Back in the election of 2008, I wrote a post titled, "The Relationship Obama Doesn't Want You To Know About." The relationship was one of many questionable--and somewhat characterologically revealing-- relationships that should have made anyone question whether Obama should even be considered to occupy the highest position in the land. The Obama machine attempted furiously to squelch any and all attempts to shed light on these relationships; and the sheep-like media went along because they were blinded by worship. Consequently, Obama's connection with Bill Ayers and the Weather Underground was never throroughly vetted. In fact, Ayers even enjoyed a round of rather positive media coverage which attempted to show he wasn't such a bad guy after all. I mean, all he did was try to blow up and kill a few people (see here). But Ayers and Obama have always been dead serious about their committment to "social justice."

Here's what I said at the time about Obama's close relationship with that unrepentant terrorist:

"First there is the ad (Michelle Malkin has more) his thugs are trying to squelch:

Then there is this, from Ben Smith:

Barack Obama's campaign hasn't advertised this a great deal this week, but the campaign's "Action Wire" has been waging large-scale campaigns against critics. That includes tens of thousands of e-mails to television stations running Harold Simmons' Bill Ayers ad, and to their advertisers — including a list of major automobile and telecommunications companies.

And tonight, the campaign launched a more specific campaign: an effort to disrupt the appearance by a writer for National Review, Stanley Kurtz, on a Chicago radio program. Kurtz has been writing about Obama's relationship with Bill Ayers, and has suggested that papers housed at the University of Illinois at Chicago would reveal new details of that relationship.

The campaign e-mailed Chicago supporters who had signed up for the Obama Action Wire with detailed instructions including the station's telephone number and the show's extension, as well as a research file on Kurtz, which seems to prove that he's a conservative, which isn't in dispute. The file cites a couple of his more controversial pieces, notably his much-maligned claim that same-sex unions have undermined marriage in Scandinavia.

"Tell WGN that by providing Kurtz with airtime, they are legitimizing baseless attacks from a smear-merchant and lowering the standards of political discourse," says the email, which picks up a form of pressure on the press pioneered by conservative talk radio hosts and activists in the 1990s, and since adopted by Media Matters and other liberal groups.

"It is absolutely unacceptable that WGN would give a slimy character assassin like Kurtz time for his divisive, destructive ranting on our public airwaves. At the very least, they should offer sane, honest rebuttal to every one of Kurtz's lies," it continues.

Kurtz, in case you are not aware, has been researching the connection between Barack Obama and Bill Ayers, including looking into records from the Chicago Annenburg Challenge (see here, here, here, and here for more details).

I don't know about you, but I for one would like to know as much as possible about the personal and professional associations of a potential US President. Those associations matter because they give insight into character and judgment--or lack of same.

If you think John Edwards' "association" with Rielle Hunter; and his subsequent attempts to squelch the story make him unfit to remain in politics, then what about Obama's relationship with the likes of Bill Ayers? The Edwards-Hunter relationship is just another example of adolescent-style hormonal imbalance coupled with the narcissistic entitlement mindset so prevalent in our political culture these days. The Obama-Ayers relationship is far more dangerous in its implications--because Ayers is not exactly a beautiful woman attemptimg to capture a powerful politician with her sexual wiles, he is an unrepentent terrorist, murderer, and liar with an ideological agenda he wants imposed on American society. Ayers famously said in his Underground days:

Characterizing Weatherman as "an American Red Army," Ayers summed up the organization's ideology as follows: "Kill all the rich people. Break up their cars and apartments. Bring the revolution home, Kill your parents."

His successful seduction of people like Barack Obama means he doesn't plan on being "underground" anymore. 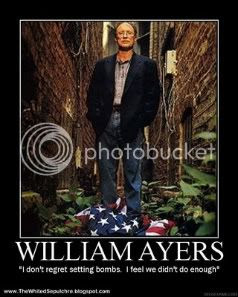 Above is Mr. Ayers stomping on an American flag in 2001
(and if that is not the symbolic equivalent of his words quoted above from 1970, then I haven't been practicing psychiatry for the last 25 years)."

As Peter Kirsonow noted in October, 2008:

Let's put this quite simply: This is an abomination. This alone disqualifies Obama from being president. Even if he can heal the planet. Even if the Dow tanks to 5000. Even if he puts a unicorn in every garage. A majority of Americans will not vote for a candidate who they know has had a working relationship with a terrorist — foreign or domestic. But they must know it.

This is not rocket science. The facts must be presented. Clearly, concisely, repeatedly. They haven't been.

Why do I bring this up now? Well, apparently, Andrew Breitbart's promise to release stunning new video of Obama from his days at Harvard will finally begin to dredge up a past that should have been thoroughly vetted the first time around. I hope we get information that goes all the way back to his "Barry Soetoro Obama" days at Occidental College, because it is a past that is littered with communists, fellow travellers, assorted alinskyites, and various unrepentant terrorists like Ayers and Dohrn.

We may be able to begin to connect the dots on Barack Obama and see how those dots led directly to people like Ayers and Dohrn.

Now, I am not much into conspiracy theories and there is no evidence to suggest that Breitbart's death was due to anything but natural causes, but it is interesting that Breitbart told CPAC that he intended to release the information on March 1, the same day he collapsed and died.

Fortunately, according to Steven Bannon, the tapes are going to be released by March 10.

Do the tapes have to do with Ayers or connect to him? I don't know obviously, but I am hoping that they may well might be the beginning of some real investigative journalism about all of this President's loose associations.

And, it is a good thing that there is a possibility these issues will be revisited prior to the Presidential election; particularly since the last 3 years have amply demonstrated to anyone with an ounce of sense that Obama's primary goal has been to force the transformation of America into becoming the country that William Ayers (as well as Jeremiah Wright AND the lovely Michelle Obama) can finally be proud of.

We simply can't afford four more years of a President with the Bill Ayers mentality in the White House.

Even in death, I'm hoping that Andrew Breitbart will have the last laugh .
Posted by Dr. Sanity at 6:55 PM