THE RACE-BAITER IN THE OVAL OFFICE

Obama: 'If I had a son, he'd look like Trayvon'

And if we had a president instead of a race baiter, he'd look nothing like Obama.

Who knew that we actually elected Al Sharpton and Jesse Jackson as our "post-racial" President?

What in heaven's name is Obama trying to do by injecting himself into these controversies? It's like spraying oil on the flames.

I suspect that most Americans are content to let justice play out and the facts be discovered in the aforementioned tragedy. But no, Obama just has to be the center of attention and stoke every flame of racism he can--and, of course, there is a very important political reason for this.

Obama's reprehensible behavior in this and the Sandra Fluke affair has nothing to do with heaven, let alone improving the race relations in America at all.

On the contrary. Inflaming racial divides; sexual divides; and in general ANY divides among the American people suits his political purposes perfectly.

The race-baiter in the oval office is trying desperately to deflect attention away from the policies that are strangling this country and dragging it into an economic death spiral. He is diverting attention away from dangerous and precarious position in which his Administration has placed the US with regard to national security.

In short, like any trickster and con artist, he must make his audience look away from his sleight of hand. He knows that helping to incite a race war (and stoking sexism and misogyny on the side) is exactly the kind of distraction needed to make a whole lot of Americans look the other way and divert their anger away from him and his Administration.

Scapegoats. The man requires scapegoats to blame and on which to focus the anger that needs to be focused on him and his Administration.

He's just another run of the mill opportunist disguised as some sort of caped crusader searching for his outrage of the day. Bleh. 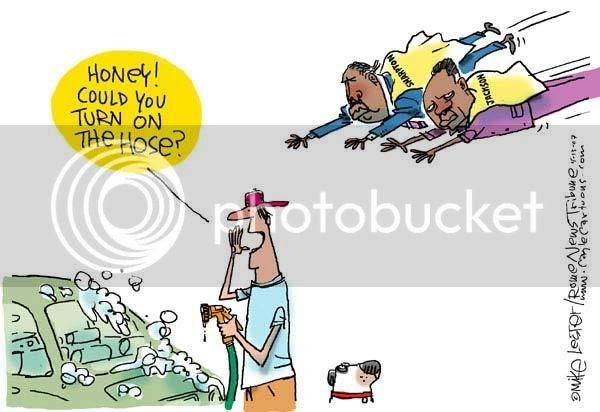