Sometimes, the only way that the denial of reality can be maintained is through self-delusion.... 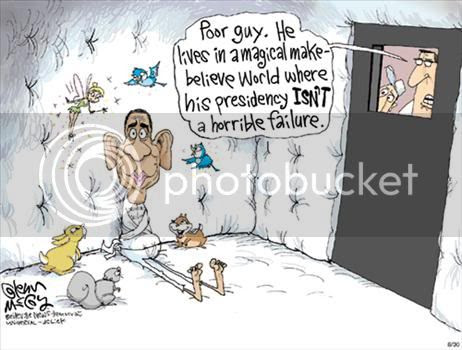 So let's talk about self-delusion for a moment.

Engaging in "self-delusion" is the act of deceiving one's self about some aspect of reality; i.e., it is a form of psychological denial.

As I have noted in previous posts, we humans have quite a number of psychological strategies with which we are able to deceive ourselves about the external world.

Just a few examples to show what I mean by this:

- by using projection some very violent and angry people are able to convince themselves that they are working for peace and harmony.

- by using delusional projection some religious fanatics who behead innocent people are able to convince themselves that they are pure and holy, while" infidels" like Jews are monsters who "eat babies" and decend from "pigs and monkeys"

- by using displacement, some people are able to convince themselves that there is a devious plan to imminently replace our secular government with a Christian theocracy; while they are singularly unconcerned about religious fanatics actively waging war on the U.S. and the rest of the world trying to institute an Islamic theocracy.

- by using fantasy some people are able to convince themselves that these particular religious fanatics are reasonable and sensible people, amenable to negotiation and moderation.

- by using denial some people are able to convince themselves that Obama's economic policies are creating jobs and improving the economy.

- by using repression some people would like to eliminate all personal feelings about 9/11 and wipe it from the American collective consciousness; thus supporting the building of a mosque at Ground Zero while we are still in a protracted war with Islamic fundamentalists.

You think you are living in a democracy but you are wrong, the members of this "reality-based" community say; only since their candidate was elected do we have a true democracy! Before that, we are living under a fascist regime.

For them it is simply a matter of opinion whether or not a person is out of touch with reality; and their opinion is just as good as yours, thank you very much.

But let's examine that interesting perspective (usually they convey it with a sneer, as in: "That's just your opinion.")

Probably the first prerequisite for accusing someone of engaging in self-delusion is that one must accept that there is an objective reality, external and independent to one's self; one's beliefs or one's emotions/feelings. Without such a fundamental epistomological foundation, it is completely meaningless to accuse anyone of self-delusion, althought postmodern intellectuals do it all the time.

For the record, self-delusion is an equal opportunity political defense. Both sides of the political spectrum are able to delude themselves fairly easily when the occasion demands it. But I am always impressed at the pervasive self-delusion that is the hallmark of modern leftist thought. No amount of reality is able to touch it.

As they wallow in their preferred form of social subjectivism, it is perfectly "reasonable" (if that is the word) from their perspective to impute delusion to others--even if every time they do so, they effectively demonstrate the invalidity of their own philosophy. That is why it is so amusing to observe their appropriation of the term "reality-based community" -- when they don't believe in any reality except for their own emotions!

It gets excessively wearisome to constantly point out to them that there is a world that exists outside their heads and outside their emotions; and that the entire purpose of reason --which they reject in favor of feelings --is about understanding that world.

Their social subjectivism posits that our minds are disconnected from reality to begin with. How then is it possible for them to accuse anyone of "self-delusion"? One simply has a differing POV that is by their definition as real and true as anyone else's.

After all, that is the basis of the multiculturalism and the "politically correct" relativism that they persistantly espouse.

You see, progressives feel that they can get away with their interpretations simply because they don't have to deal with external reality --if they feel it, it must be true! QED. The actual worsening of the economy under their watch despite driving the country into unbelievable amounts of debt is not something they care to think about. Instead, Nobel Prize winning economic morons like Paul Krugman explain the failures away by saying that the stimulous wasn't big enough! He won't be satisfied until the entire economy is destroyed; and then I'm sure he will blame the ultimate scapegoat for his failure to think: human nature.

This is pretty much the same way that a child who doesn't yet understand about causation or responsibility or even truth, is behaving when they angrily retort to someone who accuses them of something they don't want to take responsibility for ("you broke that lamp!" "No, you broke it!" "No, you did!") Those who do not believe in an external reality--or personal responsibility or truth --may freely accuse those with whom they disagree of the same kind of distortion and blindness.

How fortunate that most adults have developed cognitive capabilities that enable them to determine causation--even if a child (or the adult currently flushing our country into the toilet, for that matter) doesn't understand the concept. A series of questions are asked and answered-- Who threw the ball that broke the lamp? Whose fingerprints are on the ball? What direction did it come from? Who was in the place where the ball was thrown; were there witnesses?-- and, in the example of the broken lamp, truth is fleshed out and responsibility assigned.

For all children--and sadly, many adults these days-- "reason" is nothing more than a creative process, and is disconnected from cognition and/or perception. As I have mentioned in previous discussions, children in particular, tend to use the more "primitive" psychological defenses, because their minds are not yet mature enough for optimal cognitive functioning.

As they grow and mature both physically and mentally, they do not need to lose that creative process that utilizes their emotions as perceptual tools -- they only need to learn to subordinate it to their cognitive faculties and to appreciate external reality.

[**Brief Note: Most artists, for example, depend on access to both faculties--emotion and cognition. One would never appreciate this with the high number of Hollywood actors and actresses who completely shun the cognitive process in favor of solely using their creative and emotional facilities in understanding the world around them. This is not usually important, except insofar as such individuals are looked up to and given almost godlike status in our culture. Nevertheless, they really only cause a lot of trouble when they try to make others accept their--shall we say--creative interpretations of reality? Truly brilliant artists who stand the test of time are exactly the ones who have subjugated their creativity to reason, and managed to bring forth a work of art that is meaningful to others, as well as themselves. If they cannot do this, they never amount to anything more than a second- or third-rate artist, irrespective of medium.]

Now, getting back to the concept of "self-delusion". When both sides are convinced that the other side is deluding themselves, it becomes extremely important that SOME ADULT SOMEWHERE examine the external reality and follow a process of reason to assess the truth.

Much as the politcal left (who as a group are heavily invested in the whole postmodernistic touchy feely thingy) would like to believe that they have exclusive rights to the truth, they have actually dealt themselves out of any contest for discovering truth by insisting that truth is relative. If it IS relative, then they they must agree that I am as correct in what I think as they are. Tsk Tsk.

OTOH, if truth is NOT relative, but exists outside of whatever one side or the other feels is true, then by all means, let's get down to the evidence which will prove which side is correct. I'm game.

Do you begin to see what a house of cards they have built for themselves? If truth is relative, then by their own standards, it is not possible for anyone to be self-deluded-- since self-delusion (they call it "emotional truth" ) is their only reality.

What is most laughable is that their entire way of dealing with the world is based on a fundamental self-delusion - the denial of external reality.

When you live in a world where objective reality is unacknowledged, is it any wonder that from your perspective no one can every prove that what you feel is true, isn't really true? That is why the same distortions and creative fabrications resurface time after time in political discussions these days. The entire "the economy is all Bush's fault" for example. No matter how many times this is debunked, (or, I suspect, no matter how many years into Obamanomics we are) it will be recycled by the reality-based, or rather, the reality- deprived community.

To them, Obama may be fading as a leftist messianic superstar, but only because he is not going far enough in shoving their policies down America's throat. Certainly not because those polices don't work and never have worked! Let's see what happens when America thoroughly rejects their ideology in November.... I predict that the left will not be abashed; nor will they even consider re-examining their political --let alone their philosophical premises. No, they will whine loudly; scream hysterically; become agressive and probably violent, and insist that their policies were sabotoged by the likes of you and me (i.e., racist bigots who are homophobic, Islamophobic, and sexist to boot); that we are the ones who will not face reality, and so on and so forth ad infinitum.

Self-delusion, anyone?
Posted by Dr. Sanity at 6:56 AM