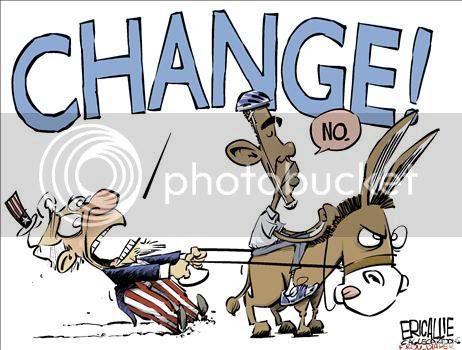 Thomas Sowell once wrote that the that political left have a major "investment in failure":

It is not just in Iraq that the political left has an investment in failure. Domestically as well as internationally, the left has long had a vested interest in poverty and social malaise.

The old advertising slogan, "Progress is our most important product," has never applied to the left. Whether it is successful black schools in the United States or Third World countries where millions of people have been rising out of poverty in recent years, the left has shown little interest.

Progress in general seems to hold little interest for people who call themselves "progressives." What arouses them are denunciations of social failures and accusations of wrong-doing.

One wonders what they would do in heaven.

We are in no danger of producing heaven on earth but there have been some remarkable developments in some Third World countries within the past generation that have allowed many very poor people to rise to a standard of living that was never within their reach before.

The August 18th issue of the distinguished British magazine "The Economist" reveals the economic progress in Brazil, Argentina, and other Latin American nations that has given a better life to millions of their poorest citizens.

Some of the economic policies that have led to these results are discussed in "The Economist" but it is doubtful that members of the political left will stampede there to find out what those policies were.

Go on! Take a wild stab at whether the policies discussed in that issue of "The Economist (200allowed the "selfish" free market to operate; or whether they represented the latest in "selfless" tyranny.

Coincidentally, America is now reaping the bitter fruit of the "selfless" tyranny of complete leftist rule. We have the selfless-tyrant-in-chief, whose every move is calculated for our very own good--and, only incidentally, to keep himself in power by stacking the political deck (think ACORN, the recently articulated goals of the NEW, IMPROVED! Injustice Department, and all the usual double dealing and payoffs that America has come to associate with Chicago-style thug/politicians, who are easily mistaken by the left as god-like and worshipped).

In the same piece quoted above, Sowell went on to note:

Despite whatever the left may say, or even believe, about their concern for the poor, their actual behavior shows their interest in the poor to be greatest when the poor can be used as a focus of the left's denunciations of society.

When the poor stop being poor, they lose the attention of the left. What actions on the part of the poor, or what changes in the economy, have led to drastic reductions in poverty seldom arouse much curiosity, much less celebration.

The failure of these leftist policies is due to the pervasive intellectual and moral bankruptcy that drives them. Obama is the poster boy for this bankruptcy; and he carelessly and stupidly repeats all the mistakes of the left's past. This time around, he firmly believes that everything will all work out because HE is the one in charge and he has cleverly repackaged all those failed policies in ribbons of hope and boxes of change. He has been aided and abetted in this perverse marketing campaign by a complicit media.

But the disastrous policies he and the Democrats have rammed down America's throat remain out of touch with reality; and like all the despots before him, Obama will deliberately and callously ignore the actual consequences to real people. Like most on the left, he is truly only concerned with two main issues:
(1) Feeling good about his moral superiority over the common folk (along with all the attendant preening self-righteousness and moral lecturing); and
(2) Keeping power over the lives of others (for their own good, of course, and society's).

America is starting to awaken from the left's latest utopian nightmare, which at its core is is regressive, rather than progressive. As for the left's claim of being "reality-based"....the only time they see reality is when they watch it in their rear view mirror disappearing into the distance behind them.

By the way...HAVE A GREAT LABOR DAY WEEKEND, EVERYONE ! And, take a minute or two sometime over the next few days to contemplate how jobs and wealth are created; and how progress is actually achieved.
Posted by Dr. Sanity at 12:23 PM