I saw this video of Milton Friedman initially over at Ace of Spades and I post it here because it makes a very important psychological point:


We put far too much power in the hands of these people we elect to be our representatives in Congress. The point Friedman is making, I think, is that WE, THE PEOPLE actually need to keep the power in our own hands and not give it up willy-nilly to these guys who then act like little demi-gods. We've ignored their behavior so much that they now believe they can get away with just about anything and don't have to listen to us except during an election year.

WE NEED TO MAKE THEM LISTEN TO US ALL THE TIME. WE NEED TO REMIND THEM FREQUENTLY WHO IS IN CHARGE--AND MAKE SURE THEY KNOW THAT IT IS NOT THEM.

All too often, we, the people, think our job is just to vote them in or vote them out. But it is more than that; and if we don't do anything in between, we get into the situation we are in today--a situation where they think they know what's best for us and pat us on the head and ignore us when they don't like what we're saying. "Just go back to your guns and religion," they say condescendingly to us, "and let us big, important people run the country."

Are you sick of that attitude yet? Well, you have no one to blame but yourself for giving these losers the impression that it is their own personal Congress. It is WE THE PEOPLE who chose to elect them. None of them are "entitled" to a seat or entitled to keep it.

I remember watching Scott Brown in a debate during his campaign in Massachusetts. I forget who asked him this question, but I think it was someone in the media who queried about his running for "Ted Kennedy's seat in Congress." Brown's answer wholly endeared him to me. He said something like: "With all due respect, this is not Ted Kennedy's seat--this is the people's seat."

If you doubt the impact of voter "behavioral modification", all you need to do is to watch the Democrat rats right now, prior to November, as they scurry over one another attempting to pretend that they didn't vote for Obamacare; that they haven't been the ones who have beggared our children's future. They are absolutely terrified of the Tea Party and are desperately trying to pretend that its very existence says something about Republicans--not Democrats (actually, it says something about all the morons in Congress who have lost touch, no matter what their party affiliation; but, since Democrats have a significant majority in both Houses, it will definitely impact them more. In fact, look how the Democrats are trying to pretend that the minority party has all this "power"--this is how the Democrats and the White House manage to 'have their cake and eat it too.')

When facing a tsunami, what do you do? Pray, and tell yourself stories. I am not privy to the Democrats' private prayers, but I do hear the stories they're telling themselves. The new meme is that there's a civil war raging in the Republican Party. The Tea Party will wreck it from within and prove to be the Democrats' salvation.

This is denial pure and simple on the Democrats' part. And, when you are in denial, just send in the clowns in a bizarre attempt to make yourself feel good and young and hip again.

Charles Krauthammer goes on in previously linked op-ed to say:

Nonetheless, some Democrats have convinced themselves that they have found the issue with which to salvage 2010. "President Obama's political advisers," reports the New York Times, "are considering a range of ideas, including national advertisements, to cast the Republican Party as all but taken over by Tea Party extremists."

Sweet irony. Fear-over-hope rides again, this time with Democrats in the saddle warning darkly about "the Republican Tea Party" (Joe Biden). Message: Vote Democratic and save the nation from a Visigoth mob with a barely concealed tinge of racism.

First, this is so at variance with reality that it's hard to believe even liberals believe it. The largest Tea Party event yet was the recent Glenn Beck rally on the Mall. The hordes descending turned out to be several hundred thousand cheerful folks in what, by all accounts, had the feel of a church picnic. And they left the place nearly spotless -- the first revolution in recorded history that collected its own trash.

Second, the general public is fairly evenly split in its views of the Tea Party. It experiences none of the horror that liberals do -- and think others should. Moreover, the electorate supports by 2-to-1 the Tea Party signature issues of smaller government and lower taxes.

What this country needs is not necessarily a third political party steeped in its delusions of grandeur; what we need is a loosely-knit organization exactly like the Tea Party, to make sure that politicians from both parties do the right thing on a day-to-day basis.

Frankly, right now these irritating,over-reaching, arrogant demi-gods in Congress seem to view voters as just a piece of meat to be cut up and divided for their pet projects. 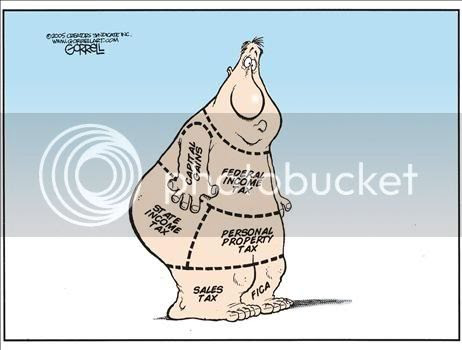 As Friedman notes, the voters can always vote the losers out in an election year; but the important thing is to make the loser you elected does the right thing by making an issue politically profitable or unprofitable to them, whichever works better. DO NOT REWARD BAD BEHAVIOR. STOP 'BUYING' THEIR SERVICES. START SHOPPING ELSEWHERE. STOP SUPPORTING THEM. WRITE ANGRY LETTERS; STOP DONATING MONEY TO THEM AND THEIR PARTY; MAKE PHONE CALLS; SIGN PETITIONS. WHATEVER!

Don't let them continue to lie and manipulate you. Dont' let them off the hook. 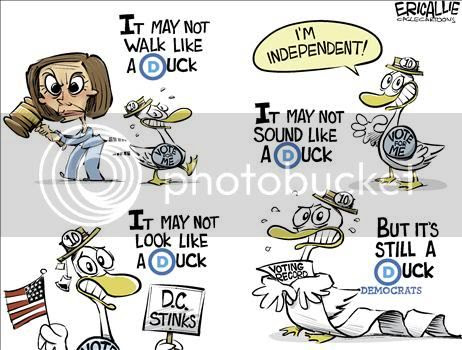 Hold their webbed feet to the fire--in November and every day after that. You have the power, not them. Make them know it every day of their political life.

The Democrats have been in an Obama-induced haze of hopiness and changiness. They have not been listening and they will pay dearly for it in the midterms. Those Republicans that didn't listen are going to pay, too.

Can they hear us now, do you think?

UPDATE: This is the kind of voter oversight that is needed of government:

The Obama Justice Department isn’t keen on enforcing Section No. 8 of the Voting Rights Act, which requires that states and localities clean up their voting rolls to prevent fraud. So ordinary citizens are doing what the Justice Department won’t — uncovering voter fraud. This report explains that 50 friends took up the effort after seeing what went on in Houston on Election Day 2008:

“What we saw shocked us,” [ Catherine Engelbrecht] said. “There was no one checking IDs, judges would vote for people that asked for help. It was fraud, and we watched like deer in the headlights.”

Their shared experience, she says, created “True the Vote,” a citizen-based grassroots organization that began collecting publicly available voting data to prove that what they saw in their day at the polls was, indeed, happening — and that it was happening everywhere.

“It was a true Tea Party moment,” she remembers.

They set up their own voter-fraud unit....[read it all]