FROM HIS LIPS TO GOD'S OBAMA'S EARS

The Chamber of Commerce gets it:

The U.S. Chamber will support any proposal that spurs job creation, bolsters both short- and long-term economic growth. We will not support an approach where the government picks winners and losers—providing tax credits and incentives to politically favored industries and groups while sticking others with the bill. This is ultimately self defeating and puts politics ahead of sound economic decisions that can create jobs. Bottom line: This president and administration have had nearly two years to help turn around our economic situation. Their agenda of more taxes, regulations, and mandates clearly isn’t working. In fact, it has created tremendous uncertainty and delayed and weakened the recovery.

Unfortunately, this kind of common sense and rel-world knowledge about economics and how the market works will never win a Nobel Prize. No, the Nobel Committee saves that honor for the morons who can't quite seem to grasp economic reality and continue to argue that the reason Obama's first economic stimulus didn't work was that it wasn't big enough.

$3 trillion in debt now, and that's not enough! Krugman won't be happy unless the trillions pile up even more. And what do we have to show for the $3 trillion so far? NADA. In fact, the unemployment rate has actually gone up since the stimulus was passed: 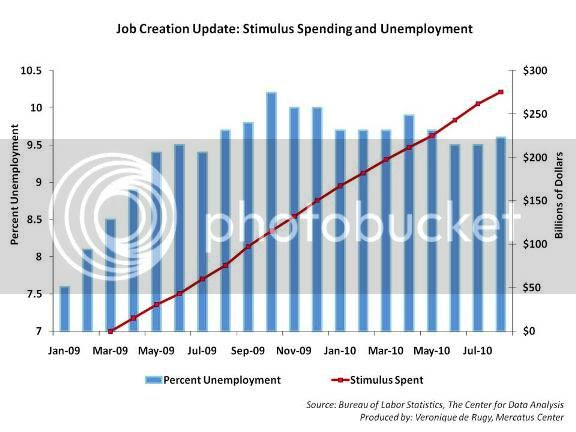 But to the political left, ideology is EVERYTHING.
Posted by Dr. Sanity at 1:57 PM