Like everyone else, I have also been hearing a lot lately about Jeremiah Wright, former pastor of the church that Barack Obama has belonged to for 20 years.

Both men, in their different ways, have for decades been promoting the far left vision of victimization and grievances-- Wright from his pulpit and Obama in roles ranging from community organizer to the United States Senate, where he has had the farthest left voting record.

Later, when the ultimate political prize-- the White House-- loomed on the horizon, Obama did a complete makeover, now portraying himself as a healer of divisions.

People on the far left like to flatter themselves that they are for the poor and the downtrodden.

...We don't need people like either Jeremiah Wright or Barack Obama to take us backward.

The time is long overdue to stop gullibly accepting the left's vision of itself as idealistic, rather than self-aggrandizing.

Indeed. Notice how it is always all about them? 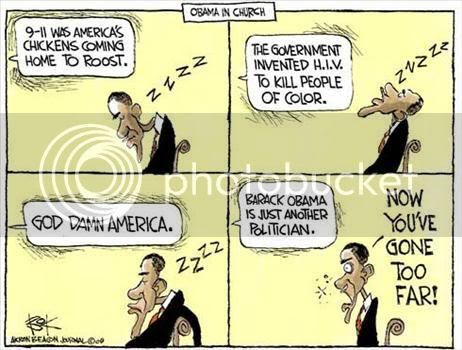