THE ECONOMIC EQUIVALENT OF CREATIONISM, OR, "GIFTS" FROM ABOVE

In my clinical practice over the years I have had many patients who dismiss the idea of planning for the future or doing anything now in anticipation of future events or to prevent future discomfort. One patient, I recall, was bemoaning the fact that, while she wanted to get out of her dead-end job, she could not go to college and get the degree that might be her ticket to that destination.

"It will take four or more years!" she exclaimed. "That's too long."

"But, four years is going to pass anyway, no matter what else you are doing," I point out to her. "Where would you rather be in four years---with a college degree, or still talking to me about wanting to get out of the job you are in?"

My point seemed simple enough to me: if you bite the bullet now, go to school, and make whatever sacrifices are necessary, then in four years you will be somewhere very different; and if you decide not to do that, then four years will pass anyway and nothing will be different.

I must have had a variation of this type of discussion at least a thousand times with different patients over the years. Not just about school, but about anything that requires planning and effort now that will pay off in the future.

Of course, this is the difference between thinking in "the short term" as opposed to thinking about "the long term." The latter is something that most politicians are incapable of doing, particularly since their mental horizon only goes as far as the next election cycle.

As John Maynard Keynes once said, "In the long run we're all dead." This sentiment has come to be the mantra of those who can't be bothered to deal proactively with life.

Anticipation is the realistic anticipation of or planning for future discomfort. This psychological defense mechanism includes goal-directed and even overly careful planning or worrying--depending on the situation. Anticipating realistic events such as death or illness or separation and loss; and then consciously utilizing personal insight and self awareness to mitigate the worse effects, if possible is the height of maturity and healthy psychological functioning. Additionally, it is one of the few healthy defense mechanisms that can be resorted to consciously and deliberately.

Anticipation involves realistic and affect-laden planning for future discomfort. [...] of all the mature defenses, anticipation rearranges outer and inner reality the least. Rather than use self-deception, anticipation spreads anxiety out over time. It involves the self-inoculation of taking one's affective pain in small, anticipatory doses....In the worlds of the psychoanalyst Heinz Hartmann, one of the pioneers of ego psychology, "The familiar function of anticipating the future, orienting our actions according to it and correctly relating means and ends to each other...is an ego function and, surely, an adaption process of the highest significance."
[...]
Most of us, like Scarlet O'Hara would prefer to "think about it tomorrow." Making a list of worries before embarking on a trip seems like a reasonable cognitive coping strategy. But nobody likes to worry; thus we "forget" to act on such advice. We would never miss planes or forget to floss our teeth if we had consciously pondered the unpleasant consequences in advance. Moreover, it is far easier to plan voluntarily for neutral events like plane trips and tooth decay than for affect-laden events like funerals and the real costs of war.

Appropriate anticipation has been the key psychological factor that has protected us so far from another terrorist attack on the homeland (probably along with some dumb luck and enemy stupidity, of course). President Bush and his administration by their actions have given the American people almost 7 years without an attack--not that he will get any credit for it; and not that the political left will credit the Patriot Act or even the increased surveillance of the NSA; or the actions of the military in Afghanistan and Iraq; or for that matter any actions taken by this administration since 9/11.

To the political left, our safety is all some big mysterious and magical state of being-- independent of any actions to ensure it. Or, as Kos, DU, and bloggers like Glenn Greenwald and their clueless readers prefer to imagine: we have been safe because of Bush and Cheney's "fear-mongering" and the threat/risk was obviously overblown. Yes, it is 'overblown', except of course, when (not "if") something devastating happens, then these same people will be in the forefront of the hysteria, blaming you know who for "not connecting the dots".

When it comes to our energy policy over the years (and this goes back to way before the events of 9/11 ever transpired) , the Democrats, the environmentalists and the left in general all simultaneously have demanded repeatedly that we come up with some magical and perfect solution--with no downside or sacrifice-- to America's energy problems and our oil dependence on the Middle East; then they proceed to do everything in their power to obstruct the implementation of any proposed solution because there are downsides and sacrifices and tradeoffs that must be made.

It reminds me of all those patients who say they want to get out of their current predicaments, but never, never are willing to do anything that will cause them the least discomfort or effort. They are always looking for some kind of magic pill as the solution to their problems, but are not interested in changing any of their own behavior.

The articleto which Mark Levin links is an eye opener. At a time when the weak dollar, the oil cartel, terrorism, and surging demand in the developing world have sent oil prices soaring, Democrats are more concerned with Santa Claus and the Easter Bunny:

You could easily get the impression that the Democrats' energy policy is just that obtuse — that they must have some gall to criticize creationism when they in fact subscribe to its economic equivalent. But as I wrote last week, I don't really think they are this ignorant. They're providing a rhetorical distraction to the fact that they want high gas prices, probably higher ones than we have right now.

I am not making a moral judgment about this — just pointing out that high gas prices are part of the Democrats' environmental agenda. Their proposed carbon emission caps would hit oil producers at the well, pushing oil prices higher, with the aim of decreasing consumption and carbon emissions. And it will probably work. You will notice that the current high prices are already having that effect of decreasing emissions — U.S. gasoline consumption is down this year for the first time in nearly two decades.

Meanwhile, in order to deflect and even harness consumer anger in the political arena, they can send out Chuck Schumer to put on this dog-and-pony show about the phantoms that are secretly directing the economy from behind closed doors. It's a smokescreen. As an energy consumer, you should be a lot more concerned about what Democrats are doing in the open Senate chamber.

When it comes to economics, the Democrats do indeed subscribe to a creationism model. Money, wealth, oil--you name it-- are all 'gifts' from some imaginary, all-powerful and mysterious source; bestowed upon us poor mortals; created out of thin air; never ending and maintainable without effort.

In the beginning, the Democrats and their government programs created heaven and earth and brought forth a utopia where the government can do everything for everyone even as they regulate and strangle to death the source of all the largesse they so casually redistribute: the creative and unfettered human spirit.

Anticipation and planning for the future is an essential behavioral characteristic of mature adults. Having your cake; eating it; and then promising to feed everyone with the same slice while destroying the oven in which other cakes might be cooked-- is the kind of magical thinking that only infants, children, and immature adults toy with. 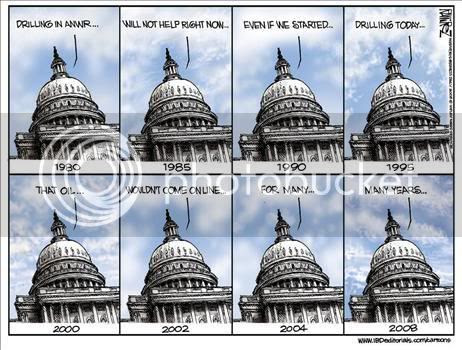