I am no fan of Hillary Clinton, but even I am starting to get annoyed at the blatant, anti-Hillary bias of the MSM--dare I say that it is rather sexist? The casual dismissal of her presidential campaign in general since the charismatic black candidate came along by the MSM--and especially since the woman won by 41 percentage points in the most recent primary against Obama is rather striking. I can't think of a single instance where a male in her position was so vilified for deciding to stay in the race, expecially when it was so close.

Check this out from Byron York:

John Edwards's appearance in Michigan to endorse Obama just happened to be set for 6:30 P.M., at the top of the networks' nightly news feeds. ABC's World News went to a live picture off the top, but Edwards apparently missed his slot, so ABC went to its China coverage and promised to return to Michigan live.

Unlike cable news, the network newscasts do not usually carry live events in their carefully-timed programs. But after China, ABC went back to Michigan while anchorman Charles Gibson explained that the Clinton campaign had hoped "that the headlines would be all about her victory in West Virginia, and yet with this…they seem a bit trumped." Gibson explained that Edwards' appearance was "timed for maximum exposure…timed for the evening newscasts." And with that, guess who walked onto the stage, with ABC carrying it live? "George Stephanopoulos, this is the kind of publicity that you can't buy," Gibson said. "This was designed to completely squash the West Virginia story," Stephanopoulos added. And with that, ABC took Obama's introduction of Edwards live, and…completely squashed the West Virginia story. Didn't even report it in any real sense. A big victory for Obama — the kind of publicity that you can't buy — courtesy of ABC News.

Whatever else she may be, Hillary Clinton happens to be the FIRST viable female candidate for President of the US and does not deserve this...well, maybe she does deserve it in the same way the left always talks about "chickens coming home to roost" (I can barely believe that I am actually defending her); but as a woman, even I am appalled at the way she is being treated in the media and by her fellow progressives, the compassionate and caring people of the left.

Yeah. Go away, sweetie; your very existence is starting to bother the left, who after all, have their priorities. 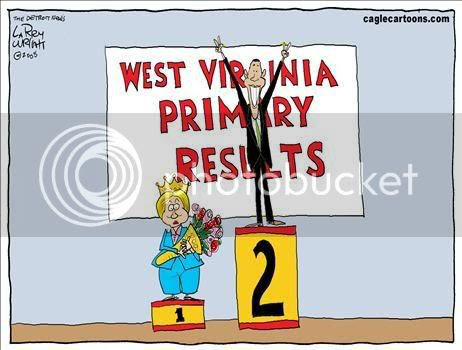